More than a Grain of Truth: The official true story behind the film Mr. Jones, starring James Norton (Paperback) 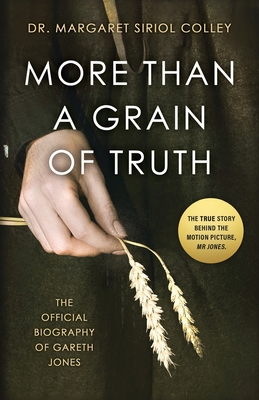 More than a Grain of Truth: The official true story behind the film Mr. Jones, starring James Norton (Paperback)

"In pursuit of his investigations he shrank from no risk... He had the almost unfailing knack of getting at things that mattered" - David Lloyd George

In 1935, Gareth Jones, a young Welsh journalist and Foreign Affairs adviser to Lloyd George, died in mysterious circumstances in Inner Mongolia, having been captured and held for ransom by bandits. It was the eve of his 30th birthday.

Two years previously he became the first journalist to expose the famine then raging across the Soviet Union. In telling the truth, instead of being feted, he was denigrated by other Moscow correspondents, debarred by the British establishment and blacklisted by the Soviet secret police.

In this stunning biography, Margaret Siriol Colley uses her uncle's letters, articles and diaries to create a picture of a man who was not afraid to speak the truth, whatever the cost.

This new and revised edition of More Than a Grain of Truth is a fascinating and personal account of the life of a brave Welsh hero, and a searing social and political history of the early thirties.

'It's embarrassing how little I knew about the subject matter and also Gareth's story itself, the fact that this man isn't known in all schools and universities is a crime so hopefully we can tell his story, celebrate the man, but also shed light on the Holodomor itself and bring some much needed attention to it' - James Norton, star of Mr Jones

'Gareth Jones had the courage to see for himself. Thanks to his reporting, and to this chronicle, we understand better one of the great horrors of the last century' - Tim Snyder (Richard C. Levin Professor of History, Yale University. Author of The Bloodlands)