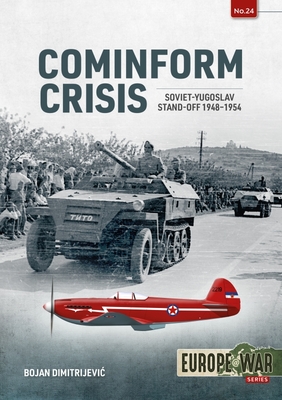 
Email or call for price
Cominform Crisis describes the first armed conflict within the Communist world after the Second World War. This occurred between Tito's Yugoslavia and the states led by the Soviet Union, in the period between 1948 and 1954. It starts with an explanation of the process of 'Sovietization' of the former Yugoslav Partisan Army, its ambitious development plans and its influence in neighboring Albania, Bulgaria and in the Greek Civil War, all of which led to growing suspicions amongst the Soviet leadership, especially Stalin. This would lead to the slow break up of mutual ties in spring 1948, and finally to the Cominform Resolution on 28 June 1948. The Resolution marked the start of the conflict that would last for almost seven years. Communist brothers-in-arms became bitter enemies and Yugoslavian borders with the communist countries of Albania, Bulgaria, Rumania and Hungary, became front lines. The political clash turned into open hostilities at the borders: with firing at border-guards, attacks on border posts, intrusions by agents and armed groups and surveillance and troop movements. Despite Tito's Yugoslavs being frightened by the expectation of aggression from the East, no invasion was launched and the war in the Korean Peninsula turned the attention of the Soviets and Americans to the Far East. Ultimately, the Cominform-Yugoslav conflict came to a slow end; through the acceptance of Yugoslavia into the US Mutual Defense Aid Program in November 1951; and after the death of Stalin in March 1953.

Cominform Crisis describes the Yugoslav Army's organization, stressing the differences in pre-1948 and later reorganizations during the conflict. It provides the reader with detailed orders of battle of the Yugoslav Army based on archival research. Cominform Crisis also describes the attempts of the Yugoslavs to establish an indigenous defense industry during this period to overcome the problem of supplying its army, stressing the development of the first Yugoslav tank, piston engine fighters, several types of vessel for the navy, and series of small arms. This book also examines the work of the Yugoslav Counterintelligence Service (KOS) and State Security (UDBA) in the widespread struggle with the Soviet and satellite intelligence services on the borders and in the ranks of the army and security forces.