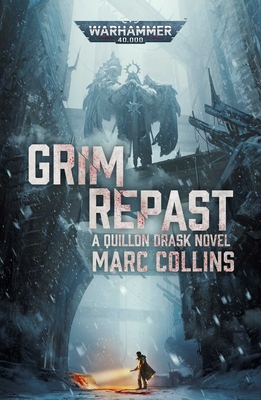 
Email or call for price
Continue to explore the sprawling metropolis of Varangantua!

Quillon Drask is a haunted man, wrestling with the daemons of his past. With a reputation that draws only the strangest cases, he is intimately familiar with the malevolent underbelly of Varangantua. Yet nothing that has gone before could have prepared the probator for the horrors which now blight the southern district of Polaris.
Faced with a savage crime with grisly implications, Drask is thrust into a hidden game of corrupt conspiracy, warring families and blasphemous revelations. Only by mastering the bitter lessons of his career and his own tortured insight can Drask hope to bring the perpetrators to justice, and curb the monstrous hunger which stalks the city.
Marc Collins is a speculative fiction author living and working in Glasgow, Scotland. He is the writer of the Warhammer Crime novel Grim Repast, as well as the short story ‘Cold Cases’, which featured in the anthology No Good Men. For Warhammer 40,000 he has written a number of short stories, including ‘Duty Unto Death’, ‘The Crueltymaker’s Kingdom’ and ‘The Death of the Prophet’. When not dreaming of the far future he works in Pathology with the NHS.