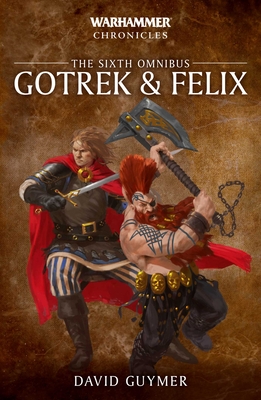 
Email or call for price
A Gotrek & Felix Omnibus

For many long years, Felix Jaeger has followed the dwarf Slayer Gotrek Gurnisson across the world. Their adventures have been extraordinary; their heroic partnership the stuff of legends. Now it ends.


With their friendship in tatters after a series of betrayals, the pair march south at the head of a ragtag army, intent on driving the forces of Chaos out of the Empire and returning Felix to his wife. But Gotrek’s doom is at hand, and great powers are at work to ensure that he meets it. With enemies on all sides and destiny calling, Felix must make a choice – to follow Gotrek into the darkness that awaits him, or to abandon his oldest friend once and for all.

Collecting City of the Damned, Kinslayer and Slayer, plus the short story ‘Rememberers’, Gotrek & Felix: The Sixth Omnibus is packed with fantasy adventure.
David Guymer's work for Warhammer Age of Sigmar includes the novels Hamilcar: Champion of the Gods and The Court of the Blind King, the audio dramas The Beasts of Cartha, Fist of Mork, Fist of Gork, Great Red and Only the Faithful. He is also the author of the Gotrek & Felix novels Slayer, Kinslayer and City of the Damned and the Gotrek audio dramas Realmslayer and Realmslayer: Blood of the Old World. For The Horus Heresy he has written the novella Dreadwing, the Primarchs novel Ferrus Manus: Gorgon of Medusa, and for Warhammer 40,000 The Eye of Medusa, The Voice of Mars and the two Beast Arises novels Echoes of the Long War and The Last Son of Dorn. He is a freelance writer and occasional scientist based in the East Riding, and was a finalist in the 2014 David Gemmell Awards for his novel Headtaker.