Paint My Name in Black and Gold (Hardcover) 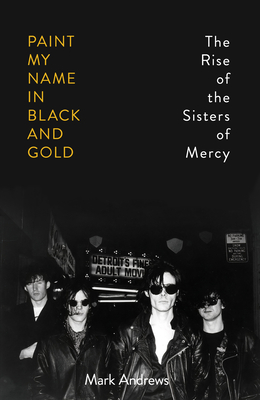 Paint My Name in Black and Gold (Hardcover)

In the early 1980s two bands dominated the independent charts: the Smiths and the Sisters of Mercy. They have proved to be equally influential. In every city in the world you will find people dressed like they have just walked offstage from playing a gig with the Sisters of Mercy in 1983.

Paint My Name in Black and Gold tells the story of their rise - how against the odds and all reasonable expectation they came to make transcendent and life-changing music. It is also about the glorious stupidity of being in a Leeds rock band in the early 80s. There's a lot of dry ice, blood, vomit, speed and sex in the toilets. There are tales involving a milk float, a VHS cassette of a Michael Caine film, a hibernating snake, a wardrobe in a tree, an amyl nitrate-soaked effects pedal and the inopportune consumption of Dutch hash cake.

The Sisters began in 1980, meandered through two years of intermittent gigging, iffy recordings and sundry line-up changes without much attention being paid to them before finding their two classic line-ups: Eldritch on vocals, Adams on bass, Gary Marx and Ben Gunn - and later Wayne Hussey - on guitars, and a drum machine called Doktor Avalanche.

By force of will and their own peculiar talents - and with the support of friends and the kindness of strangers - these young men achieved greatness. Hussey and Adams - The Evil Children, as they termed themselves - were hard living road dogs with fascinating musical back-stories. Neither Gunn nor Marx were natural rock'n'roll animals, but the latter performed with such abandon - often in such lurid shirts - that it was hard to believe he also wrote The Sisters' most delicate and beautiful music. Lead singer Andrew Eldritch was the most peculiar and compelling of them all, a singular and mesmerising amalgam of T. S. Eliot and David Bowie. In the five years covered in this book, Eldritch staked a powerful claim to be the greatest rock star of his generation.


Paint My Name in Black and Gold covers the band's rise until the release of their iconic first album.

Mark Andrews is a journalist living in Belgium. The first musician he ever interviewed was Lemmy - for the Folkestone Gazette in October 2003. Most recently, he has interviewed Jon Spencer, Boss Hog, Mudhoney and The Scientists. He has written for the Middle East Times, Egypt Magazine, LeftLion, Flanders Today, The Quietus and Louder. This book grew out of two acclaimed articles he wrote about the Sisters of Mercy for The Quietus.