Assume Nothing: A Story of Intimate Violence (MP3 CD) 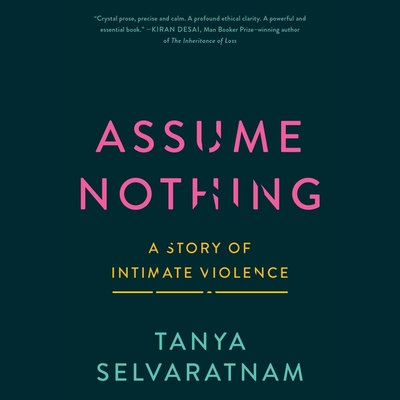 Assume Nothing: A Story of Intimate Violence (MP3 CD)

By Tanya Selvaratnam (Read by), Jennifer Friedman (Read by)

Award-winning filmmaker Tanya Selvaratnam bravely recounts the intimate abuse she suffered from former New York State Attorney General Eric Schneiderman, using her story as a prism to examine the domestic violence crisis plaguing America. When Tanya Selvaratnam met then New York State Attorney General Eric Schneiderman at the Democratic National Convention in July 2016, they seemed like the perfect match. Both were Harvard alumni; both studied Chinese; both were interested in spirituality and meditation, both were well-connected rising stars in their professions--Selvaratnam in entertainment and the art world; Schneiderman in law and politics.

Behind closed doors, however, Tanya's life was anything but ideal. Schneiderman became controlling, mean, and manipulative. He drank heavily and used sedatives. Sex turned violent, and he called Tanya--who was born in Sri Lanka and grew up in Southern California--his "brown slave." He isolated and manipulated her, even threatening to kill her if she tried to leave.

Twenty-five percent of women in America are victims of domestic abuse. Tanya never thought she would be a part of this statistic. Growing up, she witnessed her father physically and emotionally abuse her mother. Tanya knew the patterns and signs of domestic violence, and did not see herself as remotely vulnerable. Yet what seemed impossible was suddenly a terrifying reality: she was trapped in a violent relationship with one of the most powerful men in New York.

Sensitive and nuanced, written with the gripping power of a dark psychological thriller, Assume Nothing details how Tanya's relationship devolved into abuse, how she found the strength to leave--risking her career, reputation, and life--and how she reclaimed her freedom and her voice. In sharing her story, Tanya analyzes the insidious way women from all walks of life learn to accept abuse, and redefines what it means to be a victim of intimate violence.