How You Get Famous: Ten Years of Drag Madness in Brooklyn (Compact Disc) 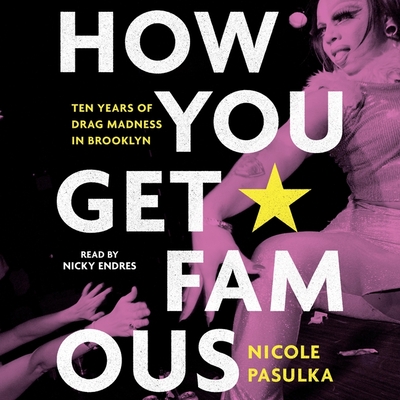 How You Get Famous: Ten Years of Drag Madness in Brooklyn (Compact Disc)


Email or call for price
A madcap adventure through a tight-knit world of drag performers making art and mayhem in the greatest city on earth.Ten years ago, an aimless coat check girl better known today as Merrie Cherry sweet-talked her boss into giving her $100 to host a drag show at a Brooklyn dive bar. Soon, kids like Aja were kicking their way into the scene, sneaking into clubs, pocketing their tips to help mom pay the mortgage, and sharing the stage with electric performers like Thorgy Thor and Sasha Velour. Because suddenly, in the biggest, brightest city in America, drag was offering young, broke, creative queer people a chance at real money--and for thousands or even millions of people to learn their names. In How You Get Famous, journalist Nicole Pasulka joyfully documents the rebirth of the New York drag scene, following a group of iconoclastic performers with undeniable charisma, talent, and a hell of a lot to prove. The result is a sweeping portrait of the 21st-century search for celebrity and community, as well as a chronicle of all the struggles, fights, and disappointments along the way. A rollicking account of the quest to make a living through an art form on the cusp of becoming a cultural phenomenon, How You Get Famous offers an unmissable romp through the gritty and glamorous world of Brooklyn drag.