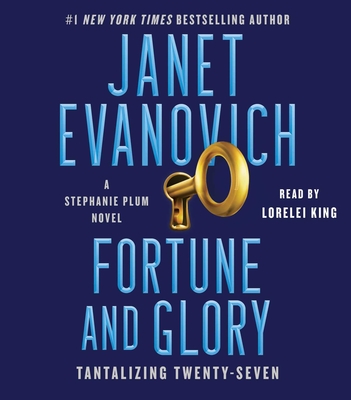 From “the most popular mystery writer alive” (The New York Times), the twenty-seventh entry in the #1 New York Times bestselling series isn’t just the biggest case of Stephanie Plum’s career. It’s the adventure of a lifetime.

She’ll need both to survive because this search for “fortune and glory” will turn into a desperate race against time with more on the line than ever before. Because even as she searches for the treasure and fights to protect her Grandma Mazur, her own deepest feelings will be tested—as Stephanie could finally be forced to choose between Joe Morelli and Ranger.
Over the last twenty-six years, Janet Evanovich has written a staggering forty-two New York Times bestsellers. In addition to her #1 bestselling Stephanie Plum novels and many other popular books, Janet is the author of The Recovery Agent, the start of a blockbuster new series.

"Lorelei King is back narrating the latest in the Stephanie Plum series. For the first time, the audiobook is deemed 'A Novel,' with no installment number in its subtitle. (It's #27.) But not much else has changed in the bounty hunter's world. Fans will find it comforting to revisit Stephanie, Lulu, Morelli, Ranger, Grandma Mazur, Connie, and Stephanie's mother, all masterfully performed by King, who creates a unique voice for each character. Yes, Stephanie explodes cars, and Lulu explodes out of her spandex clothes on their treasure-hunting mission. Evanovich also introduces a new character, Gabriela Rose, a fashion-conscious female Indiana Jones who will be featured in a brand-new series. King's pacing, accents, intonations, and ability to convincingly perform men and women, good guys and bad, keep the series entertaining."
— AudioFile Magazine