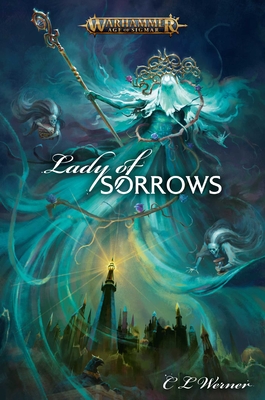 
Email or call for price
Two towns being haunted by malice, can they stand against the might of the Lady of Sorrows?

In the deathly realm of Shyish, the Twinned Towns of Westreach and Eastdale exist on the edge of annihilation. Once in each generation, the hosts of Lady Olynder rise from their tombs to slaughter the towns’ inhabitants, and for centuries the nighthaunts have been turned back, but only after the fiercest of battles. Now, the wizards in the ancient Belvegrod lighthouse have deciphered a prophetic vision that offers a chance to break the curse placed upon the city. The hero Jahangir is fated to lead a desperate mission against the Mortarch of Grief and free his people from this menace once and for all. But is Jahangir equal to the ordeal before him? Can the courage of mortals stand against the undying malice of the Lady of Sorrows?
C L Werner’s Black Library credits include the Age of Sigmar novels Overlords of the Iron Dragon, Profit's Ruin, The Tainted Heart and Beastgrave, the novella ‘Scion of the Storm’ in Hammers of Sigmar, and the Warhammer Horror novel Castle of Blood. For Warhammer he has written the novels Deathblade, Mathias Thulmann: Witch Hunter, Runefang and Brunner the Bounty Hunter, the Thanquol and Boneripper series and Warhammer Chronicles: The Black Plague series. For Warhammer 40,000 he has written the Space Marine Battles novel The Siege of Castellax. Currently living in the American south-west, he continues to write stories of mayhem and madness set in the Warhammer worlds.