The Story of the Middle Ages: Feudalism, the Church, Europe's Nations and the Crusades - A History of Medieval Times for Young Readers (Paperback) 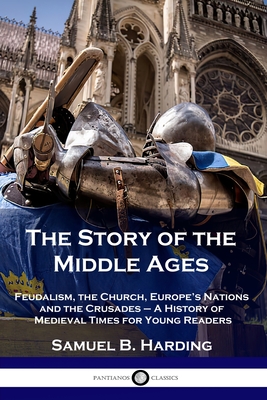 The Story of the Middle Ages: Feudalism, the Church, Europe's Nations and the Crusades - A History of Medieval Times for Young Readers (Paperback)

By Samuel B. Harding

The Middle Ages changed Europe; the dramatic collapse of the Roman Empire was followed by centuries of conflict and the making of new countries - this history, aimed at younger readers, sheds light upon this fascinating era.

With the fall of Rome - a civilization which had held control of France, parts of Germany, Spain and Britain for hundreds of years - a power vacuum opened. Formally organized regions descended into fighting, and for a time it appeared that the tribal ways of old would return. However, the emergence of King Charlemagne, who brought Christianity to Europe and unified many disparate peoples, marked the beginning of a new era: the Middle Ages.

In Medieval times, the culture was very different from what came before. Countries were organized with feudalism; the peasant class would swear fealty to a baron or lord as vassals, work the land and be called to arms in times of war. Kings would make taxes, and with these they constructed castles, waged war and developed their countries. Most formal education took place in monastic orders, while town life was bustling; via the market, many new items and goods were introduced to the peoples of Europe over centuries.