Children of the Night: The Strange and Epic Story of Modern Romania (Hardcover) 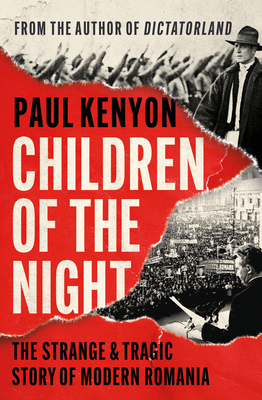 Children of the Night: The Strange and Epic Story of Modern Romania (Hardcover)

A vivid, brilliant, darkly humorous and horrifying history of some of the strangest dictators that Europe has ever seen.

The only country in Eastern Europe to speak a Latin language, Romania has always felt itself different, and its unique fate has been to experience some of the most disastrous leaderships of the last century. In the First World War her German king remained neutral until 1916. The interwar rulers form a gallery of bizarre characters and movements: the corrupt King Carol; the antisemitic Iron Guard led by Corneliu Codreanu; the vain general Ion Antonescu who seized power in 1940 and led the country into alliance with Nazi Germany. After 1945 power was handed over to Romania's tiny communist party, under whom it experienced severe repression, purges, and collectivization.

Then in 1964, Nicolae Ceaușescu came to power. And thus began the strangest dictatorship in recent European history.

Children of the Night is also a personal discovery of this extraordinary country, bringing together Paul Kenyon's eye for the private vices and kleptocratic tendencies of despots with a heartfelt exploration of the fate of one Romanian family in particular.

Paul Kenyon is a distinguished BBC correspondent and BAFTA award-winning journalist. He is the author of Dictatorland.

"Paul Kenyon sweeps away the myths of romance and horror that cling to this fascinating and mysterious country and uncovers a history that is more gripping and colourful than the fiction. The characters that people his history are boldly animated and the narrative sizzles with energy" —Allan Little, BBC correspondent and author of The Death of Yugoslavia

"A witty and page-turning narrative full of grotesque characters who led the country into a series of disasters, from the home-grown fascism of Codreanu and Antonescu to the demented Stalinist personality cult of Nicolae and Elena Ceaușescu" —Misha Glenny, author of McMafia and The Balkans

"An excellent and beautifully researched book ... Absolutely essential reading for anyone interested in Romania past and present" —John Simpson, BBC World Affairs Editor