The "Legend of Zelda: Ocarina of Time": A Game Music Companion (Studies in Game Sound) (Paperback) 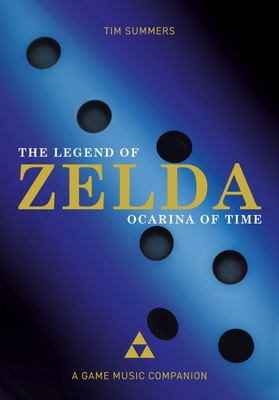 The "Legend of Zelda: Ocarina of Time": A Game Music Companion (Studies in Game Sound) (Paperback)


Usually Ships in 1-5 Days
Critical analysis of the music of the iconic 1998 Nintendo 64 video game.

More than twenty years after its creation, The Legend of Zelda: Ocarina of Time is still held in high critical regard as one of the finest examples of the video game medium. The same is true of the game’s music, whose superlative reception continues to be evident, whether in the context of the game or in orchestral concerts and recordings of the game’s music.

Given music’s well-established significance for the video game form, it is no coincidence that music is placed at the forefront of this most lauded and loved of games. In Ocarina of Time, music connects and unifies all aspects of the game, from the narrative conceit to the interactive mechanics, from the characters to the virtual worlds, and even into the activity of legions of fans and gamers, who play, replay, and reconfigure the music in an enduring cultural site that has Ocarina of Time at its center. As video game music studies begins to mature into a coherent field, it is now possible to take the theoretical apparatus and critical approaches that have been developed in antecedent scholarship and put these into practice in the context of an extended concrete game example.

The most extensive investigation into the music of a single game yet undertaken, this book serves three important primary purposes: first, it provides a historical-critical account of the music of an important video game text; second, it uses this investigation to explore wider issues in music and media studies (including interactivity, fan cultures, and music and technology); and third, it serves as a model for future in-depth studies of video game music.
Tim Summers is lecturer in music at Royal Holloway, University of London. He is the author of Understanding Video Game Music and a cofounder of the Ludomusicology Research Group.

"Summers does an excellent job of describing the soundscape of a video game within the confines of print, employing a variety of visual representations to support his prose arguments. . . . [The book] offers many things to many people: it is an in-depth analysis of a beloved game, a primer on ludomusicological terminology and concepts, a model analysis, a demonstration of the different things video game music can do, and an explication of how it does them. Summers's attention to detail, wide-ranging knowledge, and affection and respect for the subject matter are evident throughout, resulting in a superb book."