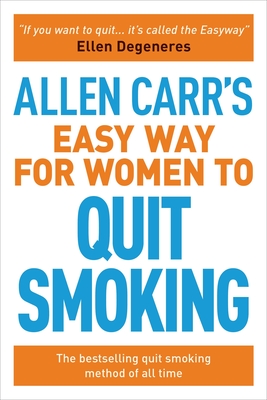 READ THIS BOOK NOW AND BECOME A HAPPY NONSMOKER FOR THE REST OF YOUR LIFE.

Allen Carr's Easyway is the most successful self-help stop-smoking method of all time. It has helped millions of smokers from all over the world to quit. In the Easy Way for Women to Stop Smoking Allen Carr addresses the difficulties that women smokers face when trying to quit, and shows how his technique successfully resolves them. Allen's unique method removes the feeling of deprivation and works without using willpower. This book can enable any woman to escape the nicotine trap easily and painlessly without putting on weight.

Allen Carr has helped cure millions of smokers worldwide and he can do the same for you. His books have sold over 16 million copies worldwide, and read by an estimated 40 million people, while countless more have been helped to quit through his network of clinics. This phenomenal success has been achieved not through advertising or marketing but through the personal recommendations of the ex-smokers who've quit with the method. Allen Carr's Easyway has spread all over the world for one reason alone: BECAUSE IT WORKS. - A UNIQUE METHOD THAT DOES NOT REQUIRE WILLPOWER
- REMOVES THE PSYCHOLOGICAL NEED TO SMOKE
- REGAIN CONTROL OF YOUR LIFE What women say about Allen Carr's Easyway method: If you want to quit... it's called the Easyway to Stop Smoking... I'm so glad I stopped.
Ellen De Generes Allen Carr's Easy Way to Stop Smoking Program achieved for me a thing that I thought was not possible - to give up a thirty-year smoking habit literally overnight. It was nothing short of a miracle.
Anjelica Huston It's the only method that works. Thank you
Ruby Wax
Allen Carr (1934-2006) was a chain-smoker for over 30 years. In 1983, after countless failed attempts to quit, he went from 100 cigarettes a day to zero without suffering withdrawal pangs, without using willpower and without putting on weight. He realised that he had discovered what the world had been waiting for - the Easy Way to Stop Smoking, and embarked on a mission to help cure the world's smokers.