The Common Wind: Afro-American Currents in the Age of the Haitian Revolution (Paperback) 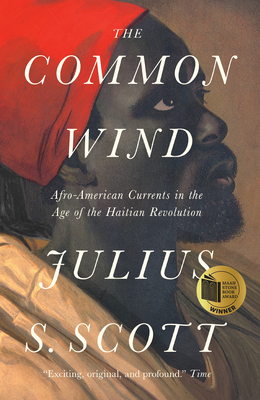 The Common Wind: Afro-American Currents in the Age of the Haitian Revolution (Paperback)

The Common Wind is a gripping and colorful account of the intercontinental networks that tied together the free and enslaved masses of the New World. Having delved deep into the gray obscurity of official eighteenth-century records in Spanish, English, and French, Julius S. Scott has written a powerful “history from below.” Scott follows the spread of “rumors of emancipation” and the people behind them, bringing to life the protagonists in the slave revolution.

By tracking the colliding worlds of buccaneers, military deserters, and maroon communards from Venezuela to Virginia, Scott records the transmission of contagious mutinies and insurrections in unparalleled detail, providing readers with an intellectual history of the enslaved.

Though The Common Wind is credited with having “opened up the Black Atlantic with a rigor and a commitment to the power of written words,” the manuscript remained unpublished for thirty-two years. Now, after receiving wide acclaim from leading historians of slavery and the New World, it has been published by Verso for the first time, with a foreword by the academic and author Marcus Rediker.

Julius S. Scott is a lecturer of Afroamerican and African Studies at the University of Michigan.

Marcus Rediker is Distinguished Professor of Atlantic History at the University of Pittsburgh and Senior Research Fellow at the Collège d’études mondiales in Paris. He is the author of numerous prize-winning books, including The Many-Headed Hydra (with Peter Linebaugh), The Slave Ship, and The Amistad Rebellion. He produced the award-winning documentary film Ghosts of Amistad, about how the Amistad Mutiny of 1839 lives on today in popular memory among the people of Sierra Leone.

“An important part of the tradition of scholarship that puts the end of modern slavery in a global perspective. As W.E.B. Du Bois, C.L.R. James, Eugene Genovese, and more recently Eric Foner, Robin Blackburn, Rebecca Scott, Thomas Holt, and Frederick Cooper have demonstrated, the transition from chattel slavery to freedom was a global process, in which the struggle over the reconstruction of the labor force had enormous implications for capitalism, democracy, liberal thought, and racial ideology.”
—Robin D.G. Kelley, author of Freedom Dreams and Race Rebels

“Scott has listened carefully for the voices—sometimes only whispers—that carried radical ideas and information around the Caribbean, leaving faint but distinct traces in the archives. He brilliantly translates to the Caribbean setting ideas originally developed by European historians about ‘history from below’ and the ways ‘masterless,’ itinerant men and women could drive political change. His prose beautifully evokes bustling ports and markets, remote jungle and mountain hideaways, wind-swept ship decks and fetid, cargo-laden hulls”
—David A. Bell, New York Review of Books

“Julius S. Scott’s The Common Wind is a tour de force. Rigorously researched and beautifully written, it has profoundly shaped our understanding of Black Atlantic history. Indeed, Scott’s study of the movement of people, ideas, words, papers, and even feelings among people of African descent in the eighteenth century is a stunning model for any kind of history.”
—Ada Ferrer, author of Insurgent Cuba and Freedom Now

“Over the past three decades, scholarship on the Black Atlantic and black internationalism has flourished. The Common Wind deserves a great deal of credit for this development … Julius Scott offers an inspiring history about the subaltern production, transformative power, and global circulation of ideas.”
—Brandon Byrd, African American Intellectual History Society

“A captivating odyssey across the age of Revolution.”
—Times Literary Supplement

“This is meticulous and wide ranging social history, which provides a vivid and illuminating account of the ways these societies worked, whether under British, French or Spanish colonial rule.”
—Counterfire

“This iconic book speaks to what we all see unfolding in the world today where masses are seeing, becoming, and most of all moving ideas that are taking collective hold across the globe … One of the most highly sought out intellectual histories of slavery that centers ‘rumors of emancipation,’ [The Common Wind] shows the parallel not only to protest but the unending fears of the global influence that mobilization can have.”
—Sowande’ M. Mustakeem, Age of Revolutions

“The Common Wind, which takes its title from Wordsworth’s sonnet to Louverture, is based on Scott’s 1986 doctoral dissertation. Photocopies—and, later, PDFs—of his thesis had circulated among historians like an ‘underground mixtape.’ As the dissertation did the rounds, through at least two generations of professors and students, it helped define the emerging field of Atlantic world history.”
—Pooja Bhatia, London Review of Books