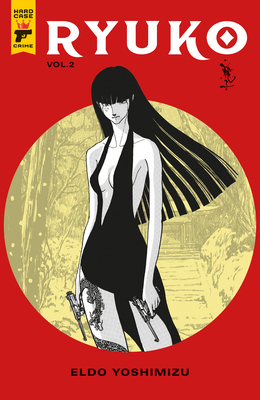 
Email or call for price
The conclusion to Eldo Yoshimizu's stunning manga story.

The final book which explores the shocking life of Ryuko, a tough woman of the Yakuza.

Volume One saw Ryuko's past being explored, the shocking involvement of her family, and revelations about her mother. Now Ryuko sets about putting things right, searching for lost members of her family, and attempting to save allies who are in dire situations. But the involvement of a Chinese criminal organisation make things difficult - almost impossible - for Ryuko...
Eldo Yoshimizuwas born in 1965 in Tokyo. Having specialized in sculpture while studying at the University of Arts in Tokyo, he has installed numerous works in public space - some of them are among the most significant sculptures in Japan. Exhibitions in Japan as well as throughout Asia and in New York prove his international success and led him in 1994 to a scholarship as "Artist in Residence" in New York. In 2003 he realized the work »First Light« for the art and exhibition space of the Louis Vuitton branch in Omotesando. With the feeling of having satisfied his hunger in the field of contemporary fine art, he turned to Gekigaand began to focus on the interplay of object and space in
the art of storytelling. He also works as a photographer and as a musician.
"Respected fine artist Yoshimizu propels an enormous cast through a complicated plot that twists and turns without ever losing momentum and presents action sequences—of which there are many—in brilliantly disorienting compositions that emphasize speed and a sense of unfolding carnage. Fun for fans of Manga, crime epics, espionage thrillers, action adventure, and bold choices in illustration and storytelling. "- Library Journal Starred Review

"Yoshimizu’s tale of tragedy, betrayal and redemption is filled to the brim with abstract motion and unnerving violence. You’ll find yourself immersed in these well constructed battle sequences" - Ripe Mangoes

“Ryuko Vol. 2 does a phenomenal job of finishing out the series. Yoshimizu’s art style continues to be in a league of its own ... the layered characters and the intricate, fast-paced story keeps you entertained with every twist and turn ... 5/5” - But Why Tho

"A continued rush of reading, complete with some beautifully kinetic artwork that makes 200+ pages simply fly by ... Yoshimizu has that magnificent skill of being able to tell a really fast tale but hold everything together" - Comicon.com

"Fast-moving and action-packed, and makes for a compelling read" - Barnes & Noble SciFi Blog

“So outrageous that even Jackie Chan would be impressed with its audacity. ... Yoshimizu’s energetic, bold, and—yes—sexy artwork is cool enough to carry the day. Recommended.” - The Manga Critic