The Tour According to G: My Journey to the Yellow Jersey (Hardcover) 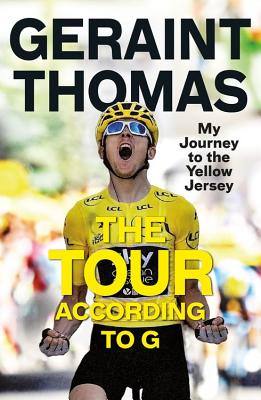 The Tour According to G: My Journey to the Yellow Jersey (Hardcover)

"This year G was the strongest rider, and he finally had Lady Luck on his side. An unstoppable combination" --Chris Froome
"I understand what Geraint's win meant: for him, for me, for the team, and for Wales, too" --Dave Brailsford
"Wow" --Thierry Henry
For years Geraint Thomas appeared blessed with extraordinary talent but jinxed at the greatest bike race in the world: twice Olympic gold medalist on the track, Commonwealth champion, yet at the Tour de France a victim of crashes, bad luck, and his willingness to sacrifice himself for his teammates.
In the Summer of 2018, that curse was blown away in spectacular fashion--from the cobbles of the north and the iconic mountain climbs of the Alps to the brutal slopes of the Pyrenees, and finally, the Champs-Elysees in Paris. As a boy, G had run home from school of summer afternoons to watch the Tour on television. This past July, across 21 stages and three weeks, and under constant attack from his rivals, he made the race his own.
With insight from the key characters around Geraint, this is the inside-story of one of the most thrilling and heart-warming tales in sport.
Not only can nice guys come first--they can win the biggest prize of all.
Geraint Thomas MBE is the winner of the 2018 Tour de France, a double Olympic gold medallist and multiple world champion who has been an indispensable part of Team Sky since its inception. A Tour de France veteran, he had both completed the entire race with a fractured pelvis and been essential in piloting Chris Froome to the yellow jersey multiple times before his own win.
A lead-out man for world road race champion and multiple Tour stage winner Mark Cavendish, he has watched and contributed from the inside as British cycling has been transformed over the past decade. In 2014 he won Commonwealth road race gold in Glasgow and was voted BBC Wales Sports Personality of the Year. In 2015 he became the first British rider to win the E3 Harelbeke: in 2016 he won Paris-Nice and in early 2018 won the Criterium du Dauphine.