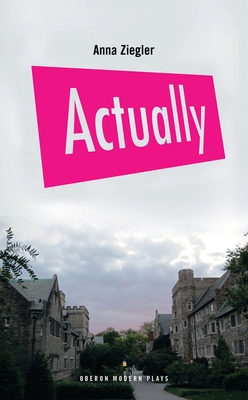 At a raucous party during their freshman year at Princeton, Tom and Amber connect in ways that seem innocent enough at first. But as things progress, they find themselves in murky territory, with ramifications that could affect the rest of their lives.

What actually happened between them? Actually explores the difficult question of how to define the point at which sex ceases to be consensual. Tom, a black music student, and Amber, a shy Jewish student, each make their case, addressing the audience, not one another. Each has their own version of what they believe to be true. They give evidence to a Campus Committee which is ill-equipped to handle such cases. Actually has been described as an extraordinary piece of theatre. The brilliance in Ziegler's writing is in its ability to explore the issue of each character's history, mixed with gender politics, social class and race to indicate the unconscious desires that influenced their actions on the night.
Anna Ziegler's play PHOTOGRAPH 51, produced on the West End starring Nicole Kidman and directed by Michael Grandage, won London's 2016 WhatsOnStage award for Best New Play. It has been produced around the world, most recently in Hamburg, Rome, and Stockholm. Her new play ACTUALLY, was produced in 2017 at The Geffen Playhouse (where it was nominated for six Ovation Awards, including Best Production and Best Play), The Williamstown Theatre Festival and The Manhattan Theatre Club. THE LAST MATCH, which played the Roundabout Theatre in 2017, premiered at The Old Globe Theatre and was nominated for the 2016 San Diego Theatre Critics Circle Outstanding New Play award. BOY, which premiered off-Broadway in a Keen Company/Ensemble Studio Theatre co-production, was nominated for the 2016 Outer Critics Circle John Gassner Award, and will be produced at TimeLine Theatre in Chicago in 2018. THE WANDERERS, commissioned by The Old Globe Theatre, will premiere there in 2018. A DELICATE SHIP was produced at Cincinnati Playhouse in the Park and The Playwrights Realm and was a New York Times and Time Out Critic's Pick. Anna holds commissions from Second Stage Theatre, The Roundabout, The Geffen Playhouse and Seattle Rep.

“Wrenching. Ziegler’s riveting new drama…creates a portrait of a generation… With consummate skill, the playwright assembles [an] intricate jigsaw puzzle.” The Boston Globe

“Smart and penetrating… A top-notch narrative that travels beyondthe hot-button issue of date rape it tackles. The characters…are asfinely etched as in a good novel, and as satisfying.” LA Weekly

“Crafted with compassion, intelligence and insight…Ziegler writes dialogue that is equal parts humor and poignancy…It is not to be missed.” Theatermania