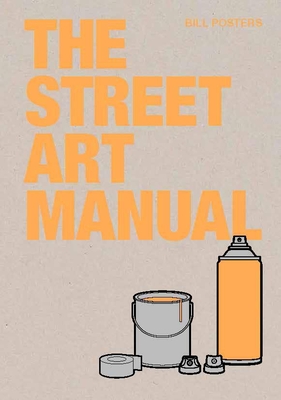 
Usually Ships in 1-5 Days
The Street Art Manual is the world's first book to combine practical advice and tactical guidance for creating 11 forms of street art in public space around the world.

Every type of street art is covered, including graffiti, stencilling, subvertising, large scale murals, wheat pasting, urban projections, aerial art, yarn bombing, guerrilla theatre, banner drops and projectiles. Each technique is illustrated with step-by-step drawings and straight forward advice about what you need and how to do it.

Written by award-winning artist, author and agitator Bill Posters, The Street Art Manual covers a diverse range of works by artists and collectives from across five continents, as well as legal information on Freedom of Expression, criminal damage and trespassing.

Arm yourself with the tips and knowledge that no other guide will give you and go out and reclaim the streets in the name of urban creativity.

Over the last decade Bill Posters has worked alongside artists and activists to create some of the world's largest unlawful street art projects via the Brandalism project. In 2019 his project "Spectre", which included a deep-fake video based on Mark Zuckerberg, received huge global media acclaim.

Matt Bonner is a graphic artist, designer, and social justice campaigner. He works with campaigning groups and grassroots activists to use subversive art as a tool for progressive social change. In 2018 Matt designed the world-famous "Trump Baby" blimp.
Bill Posters is an award-winning artist, author and agitator. Over the last decade he has worked alongside artists and activists to create some of the world's largest unlawful street art projects. In 2019 his project "Spectre", which included a deep-fake video based on Mark Zuckerberg, received huge global media acclaim.
"If you've wanted to start your graffiti career but haven't the faintest idea how to get off the ground, your plan of attack is here....If you develop your own style, you could just be the next Banksy." - Cool Material

"Bill Posters knows his street art and activism history.... he'll give you a solid foundation on precedence for this rebellious art life in The Street Art Manual." - Brooklyn Street Art ,

"If your loved one has ever wanted to take their art from canvas to city block, this is the book for them. The manual covers everything from graffiti, stencils, projection and more. You'll have everything you need to creatively reclaim the streets in your neighborhood." Brit + Co