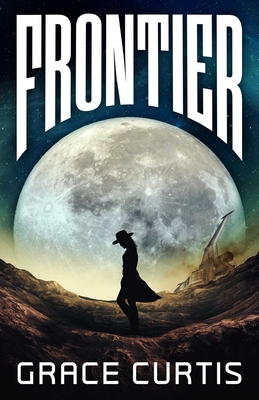 
Coming Soon - Available for Pre-Order Now
FRONTIER is a heartfelt queer romance in a high noon standoff with our planet’s uncertian future.

"Curtis oozes charm and humour in this pacey debut, which will be devoured by fans of Fallout and Firefly" Tamsyn Muir

A dazzling debut for fans of Becky Chambers and Mary Robinette Kowal.


In the distant future most of the human race has fled a ravaged Earth to find new life on other planets. For those who stayed a lawless society remains. Technology has been renounced, and saints and sinners, lawmakers and sheriffs, travelers and gunslingers, abound.

What passes for justice is presided over by the High Sheriff, and carried out by his cruel and ruthless Deputy.

Then a ship falls from the sky, bringing the planet’s first visitor in three hundred years. This Stranger is a crewmember on the first ship in centuries to attempt a return to Earth and save what’s left. But her escape pod crashes hundreds of miles away from the rest of the wreckage.

The Stranger finds herself adrift in a ravaged, unwelcoming landscape, full of people who hate and fear her space-born existence. Scared, alone, and armed, she embarks on a journey across the wasteland to return to her ship, her mission, and the woman she loves.

Fusing the fire and brimstone of the American Old West with sprawling post-apocalyptic science fiction, FRONTIER is a heartfelt queer romance in a high noon standoff set against the backdrop of our planet’s uncertain future.
Outside of novels, Grace Curtis mostly makes her living from video games. She's written for magazines like Eurogamer and Edge, and has a wonderful day job at an indie game publisher called Future Friends. When not writing she can usually be found up a hill somewhere, climbing or hiking or lolling idly in the grass. She lives in Bristol, UK.
‘Curtis oozes charm and humour in this pacey debut, which will be devoured by fans of Fallout and Firefly’ -- Tamsyn Muir, NYT bestselling author of The Locked Tomb series

‘A delightfully inventive sci-fi western. With her debut, Curtis weaves a masterful web of longing, desperation, and intrigue, effortlessly transporting you to a climate-ravaged Earth, where the stakes are high and the body count is even higher. If you liked Firefly, you're going to absolutely love Frontier’ -- Kate Dylan, author of Mindwalker