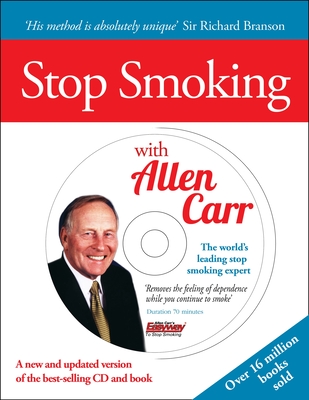 Would you like to stop smoking easily and painlessly?

If so, this book and CD contain everything you need. They work without the need for willpower, there are no scare tactics and you won't put on weight. Allen Carr is the world's leading expert on helping smokers to quit and this package includes an updated version of his internationally best-selling Easy Way to Stop Smoking, as well as a unique CD of Allen personally giving you all the expertise and support you'll need to become a happy non-smoker for the rest of your life. His books have sold over 15 million copies worldwide, and read by an estimated 40 million people, while countless more have been helped to quit through his network of clinics. This phenomenal success has been achieved not through advertising or marketing, but through the personal recommendations of the ex-smokers who've quit with the method. Allen Carr's Easyway has spread all over the world for one reason alone: BECAUSE IT WORKS. What people say about Allen Carr's Easyway method:

I stopped smoking... I read this book by Allen Carr. It's called the Easy Way to Stop Smoking. Everyone who reads this book stops smoking
Ellen DeGeneres The Allen Carr program was nothing short of a miracle.
Anjelica Huston It was such a revelation that instantly I was freed from my addiction.
Sir Anthony Hopkins His skill is in removing the psychological dependence.
The Sunday Times
Allen Carr was a chain-smoker, who used to get through a hundred cigarettes a day until he discovered the Easyway to Stop Smoking in 1983. His method involves a psychological reappraisal of why people smoke as well as understanding the subtle and pervasive nicotine trap and how it works. No other method has ever been as successful in getting smokers to quit.