The Kitchen Cabinet: An Almanac for Food Lovers (Hardcover) 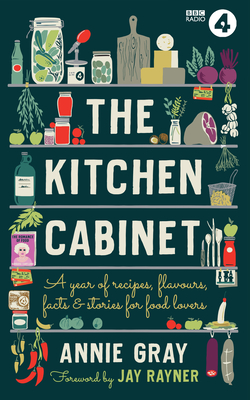 The Kitchen Cabinet: An Almanac for Food Lovers (Hardcover)


Usually Ships in 1-5 Days
From the author of The Official Downton Abbey Cookbook comes a lively tour of the British year in food, celebrating regional recipes, places, festivals, and ingredients,

Let food historian Dr. Annie Gray guide you through a year of British food as she explores its many joys month-by-month. Amuse your bouche with recipes such as Lamb Biriyani and Stargazy Pie, tidbits of information about British food history across the country, and key people who've shaped British cuisine.

Delve into seasonal ingredients, what produce to grow and when, and cooking tips alongside books, regional delicacies and historical moments that have shaped Britain as a nation. And of course, this delightful almanac wouldn't be complete without the answers to some of the BBC Radio show The Kitchen Almanac's most asked questions from over the years.

The first official book from a hit BBC Radio series with a foreword by presenter and esteemed food writer Jay Rayner, The Kitchen Cabinet: An Almanac for Food Lovers is a delicious companion that will fill your year with flavor.

Dr. Annie Gray is a historian, cook, broadcaster, and writer specializing in the history of food and dining in Britain from around 1600 to the present day. She is the resident food historian of BBC Radio 4's The Kitchen Cabinet and is the author of three further books including The Official Downton Abbey Cookbook and How to Cook: The Victorian Way with Mrs Crocombe. Jay Rayner is the Observer's restaurant critic.
“Gray’s thoughtful and informed prose elevates it from mere tie-in to a truly useful work of culinary history.” —Publishers Weekly on The Official Downton Abbey Cookbook