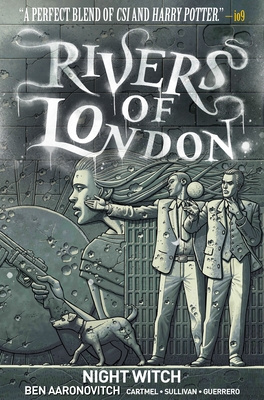 This is book number 2 in the Rivers of London series.

Press-ganged into helping a Russian oligarch hunt his missing daughter, PC Peter Grant and his boss, Thomas Nightingale, London's only wizarding cops, find themselves caught up in a battle between Russian gunmen, a monstrous forest creature - and their nemesis: The Faceless Man. But as Grant and Nightingale close in on the missing girl, they discover that nothing about this case is what it seems!

When the young daughter of a wealthy Russian ogliarch is seemingly kidnapped by mythical monster the Leshy, Peter and Nightingale must delve further into the supernatural than ever before to find the truth, before it's too late for the girl. But there is something off about this case. For one, Leshies don't exist. Two, if they did, they certainly wouldn't be found in Kent, England! The magical special unit must enlist the help of Varvara Sidorovna Tamonina, Night Witch by name and nature! But will they uncover something even more sinister along the way?
Ben Aaronovitch has written for TV, his credits including Doctor Who and Casualty; his Rivers of London novels have been international bestsellers and he has finally fulfilled his dream of adding a comic to the series; in this he has been joined by fellow writer and regular Doctor Who contributor Andrew Cartmel.

Fellow Doctor Who creator, artist Lee Sullivan, also joins the team. Lee has a long, illustrious career as a comics artist, his work including not just Doctor Who but the likes of Transformers, Robocop and Judge Dredd.
"Plenty of action and intrigue, with a splash of dry humor and witchcraft" - Word of the Nerd

"Chock full of all the drama, mystery, and action" - FanboyNation

“Marvel, as ever, in the brain-seducing visuals of Sullivan and Guerrero.” - Warped Factor