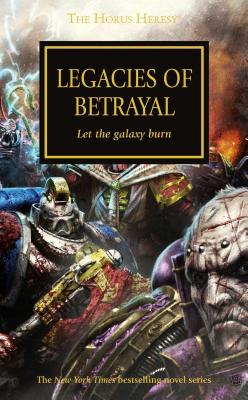 This is book number 31 in the The Horus Heresy series.

Only from out of great conflict can true heroes arise. With the galaxy aflame and war on an unimaginable scale tearing the Imperium apart, champions of light and darkness venture onto countless fields of battle in service to their masters. They ask not for remembrance or reward – simply to meet their destiny head-on, and only by embracing that destiny will they come to learn what the unseen future may yet hold for them... This Horus Heresy anthology contains eighteen short stories by authors such as Graham McNeill, Aaron Dembski-Bowden, Nick Kyme and many more. Also, Chris Wraight’s acclaimed novella ‘Brotherhood of the Storm’ delves into the nature of the elusive White Scars Legion, and their questionable sense of duty to the Emperor.
Aaron Dembski-Bowden is the author of the Horus Heresy novels The Master of Mankind, Betrayer and The First Heretic, as well as the novella Aurelian and the audio drama Butcher’s Nails, for the same series. He has also written the Warhammer 40,000 novel Spear of the Emperor, the popular Night Lords series, the Space Marine Battles book Armageddon, the novels The Talon of Horus and Black Legion, the Grey Knights novel The Emperor’s Gift and numerous short stories. He lives and works in Northern Ireland.

Chris Wraight is the author of the Horus Heresy novels Warhawk, Scars and The Path of Heaven, the Primarchs novels Leman Russ: The Great Wolf and Jaghatai Khan: Warhawk of Chogoris, the novellas Brotherhood of the Storm, Wolf King and Valdor: Birth of the Imperium, and the audio drama The Sigillite. For Warhammer 40,000 he has written The Helwinter Gate, The Lords of Silence, Vaults of Terra: The Carrion Throne, Vaults of Terra: The Hollow Mountain, Watchers of the Throne: The Emperor’s Legion, Watchers of the Throne: The Regent’s Shadow and many more. Additionally, he has many Warhammer novels to his name, and the Warhammer Crime novel Bloodlines. Chris lives and works in Bradford-on-Avon, in south-west England.

Nick Kyme is the author of the Horus Heresy novels Old Earth, Deathfire, Vulkan Lives and Sons of the Forge, the novellas Promethean Sun and Scorched Earth, and the audio dramas Red-Marked, Censure and Nightfane. His novella Feat of Iron was a New York Times bestseller in the Horus Heresy collection, The Primarchs. Nick is well known for his popular Salamanders novels, including Rebirth, the Sicarius novels Damnos and Knights of Macragge, and numerous short stories. He has also written fiction set in the world of Warhammer, most notably the Warhammer Chronicles novel The Great Betrayal and the Age of Sigmar story ‘Borne by the Storm’, included in the novel War Storm. More recently he has scripted the Age of Sigmar audio drama The Imprecations of Daemons. He lives and works in Nottingham.