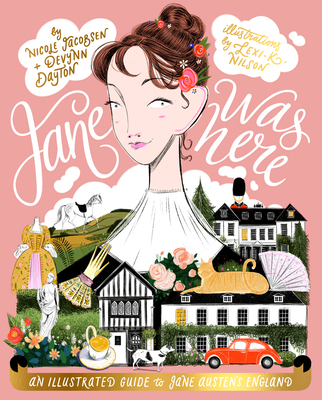 
Usually Ships in 1-5 Days
Jane Was Here is a whimsical, illustrated guide to Jane Austen's England - from the settings in her novels and the scenes in the wildly popular television and film adaptations, to her homes and other important locations throughout her own life.

Discover the stately homes of Basildon Park and Ham House and the lush landscapes of Stourhead and Stanage Edge. Tread in Jane's footsteps as you explore her school in the old gatehouse of the ruined Reading Abbey; her perfectly-preserved home in her Chawton cottage, where she spent the last eight years of her life; or her final resting place in Winchester Cathedral.

Whether you want to take this book as your well-thumbed guide on a real Austenian pilgrimage of your own, or experience the journey from the comfort of your own living room, Jane Was Here will take you - with a tone as wry as Jane's itself - on an enchanting adventure through the ups and downs of the world of Jane Austen.
Nicole Jacobsen is a literature graduate with an interest in exploring 18th Century female authors and has contributed to projects with the Wordsworth Trust.

Devynn MacLennan Dayton has worked with Nike, Stance and Tai Pei, and brings her communications expertise to bear on this new project.

Lexi K. Nilson has a BFA in illustration, and previous children's books projects include The Many Masks of Margo Magnolia.