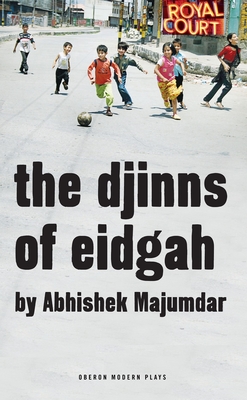 Ashrafi and Bilal are orphaned siblings stranded and defined by the troubles in Kashmir. 18 year old Bilal is the pride of the region, part of a teenage football team set for great heights, and pushed to the limits by the violence around them. Haunted by hope, his sister is caught in the past, and Bilal is torn between escaping the myths of war and the cycles of resistance.

Interweaving true stories and testimonies with Islamic storytelling, the play paints a magical portrait of a generation of radicalised kids, and a beautiful landscape lost to conflict.
Abhishek Majumdar is an Indian playwright and director who grew up in Delhi and now lives in Bangalore. He writes in English, Hindustani (Hindi/Urdu) and Bangla. He is the artistic director of the Indian Ensemble and a winner of the Metro Plus Playwriting award for his play Harlesden High Street which was produced by Tara in 2013. His other work includes Rizwaan (Urdu/English), Lucknow '76, An Arrangement of Shoes and Afterlife of Birds. His latest play as a director, Gasha (Hindi/Urdu/Kashmiri) won the best play award at the Mahindra Excellence in Theatre Awards, New Delhi. He studied theatre at LISPA (London International School of Performance Arts) and attended the Royal Court International Residency in 2011 to continue his work on The Djinns Of Eidgah, which was produced at the Writers Bloc Festival and in other parts of India in 2012.

'A play can be a means of heightening one's political and cultural awareness. This piece by a young Indian writer, Abhishek Majumdar, certainly does that.... politically enlightening and theatrically hypnotic... a fascinating piece of storytelling' 4 stars - Guardian

'powerful and haunting... In more ways than one, a transporting experience" 4 stars - Independent

'Majumdar's haunting play… exemplifies what theatre can bring to our understanding of the most grievous conflicts in the world. We are aware that most long-running disputes are weighed down by layers of grief and tangled history. Majumdar…brings us a little closer to what it is like to live with that legacy.' 4 stars - Financial Times