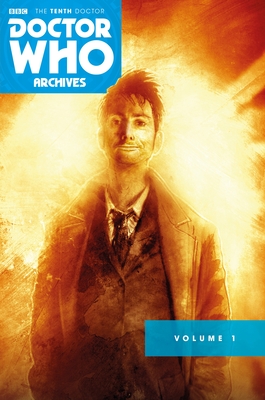 
Usually Ships in 1-5 Days
From the Tenth Doctor Archives #1-12: Agent Provocateur; The Forgotten.

AGENT PROVOCATEUR: The Tenth Doctor and Martha Jones are travelling through time and space, protecting the oppressed, stopping evil in its tracks, and searching for the best chocolate milkshakes in the galaxy. But a stranger has his sights set on the Doctor, a valuable collectable as the last of the Time Lords of Gallifrey. Meanwhile, entire planetary populations are inexplicably disappearing - but for what cause?

THE FORGOTTEN: Stranded in a strange museum filled with memorabilia from his past, the Doctor has no recollection of his previous selves. With the TARDIS missing and a mysterious figure watching their every move, it's up to Martha to help the Doctor trigger his memory and find the blue box. Featuring ten Doctors and a host of companions - from Ian and Barbara to Rose Tyler - delve into the depths of the Doctor's mind on adventures through the ages!
Gary Russell is a best known as a writer for Doctor Who. He has worked as a script editor on The Sarah Jane Adventures and Torchwood, and has written a number of successful Doctor Who spin-off novels, encyclopedias, and comics.

Tony Lee is a multi-award winning British writer who has topped the New York Times bestseller list. He has written for a multitude of mediums, including radio, newspapers, and children's novels.