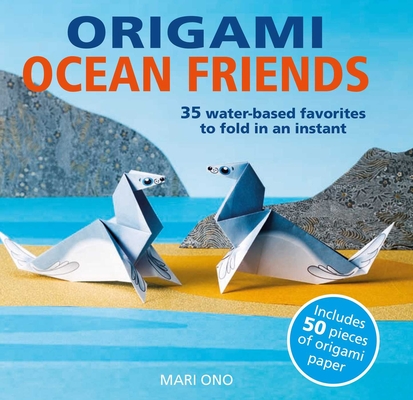 
Usually Ships in 1-5 Days
Take a trip to the sea with these 35 ocean-based origami projects from bestselling author Mari Ono. Includes 50 sheets of origami paper.

Take a trip to the sea with these 35 ocean-based origami projects from bestselling author Mari Ono.

Taking inspiration from the BBC's Blue Planet series, Mari Ono has put together an awesome collection of ocean dwellers and seaside creatures. Split into four sections, start with Along the Coastline, where you’ll find a seagull, pelican, and polar bear to practice your folds on. Next comes In the Rock Pool, with a crab, starfish, and sea anemone to make, followed by Around the Reef, which is packed with tropical fish. Finally, In the Deep has a turtle, ray, squid, and more to try. Every project comes with simple step-by-step instructions and clear photographs, as well as helpful arrows showing you where to fold. Each design has also been given a skill rating, so start with an easy one and once you’ve mastered that, move on to something a bit more challenging. Fifty specially designed pieces of origami paper are included with the book, meaning you can start folding right away.
Mari Ono is an expert in origami and all forms of papercrafts. Her other books include the best-selling The Simple Art of Origami, Origami for Children, More Origami for Children, How to Make Paper Planes and Other Flying Objects, Dinogami, Wild and Wonderful Origami, Origami for Mindfulness, and Origami Farm, all available from CICO Books. Originally from Japan, Mari is now based in the UK.