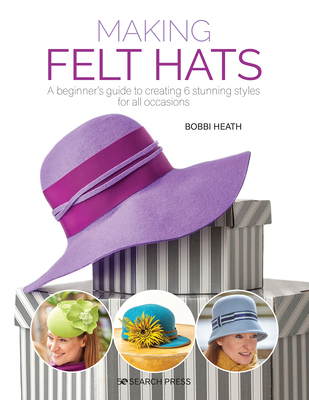 A stunning felt hat is the perfect accessory for any occasion - from an everyday addition to your winter wardrobe to a head-turning statement piece for a special occasion. In this practical and informative guide, expert milliner Bobbi Heath shows you how to make felt hats in six different styles to perfectly complement any outfit, including a fabulous floppy hat, cloche, bucket, pill box, cap and button.

Bobbi starts with the basics of how to measure your head, then talks you through the secrets of stiffening the felt, using steam to mould your fabric, and blocking. Learn invaluable stitching and edging techniques, then have fun experimenting with trimmings to make your hat unique.

This practical book will appeal to all hat lovers and anyone looking for an easy introduction to the art of millinery.
Bobbi Heath is a couture milliner. Her love of hats began at age 13 when she cut a pattern from her brother's school cap and made a jockey hat. She was hooked and bought various hats which she re-trimmed and spray painted.

Bobbi qualified as a teacher, then completed City & Guilds levels 2 and 3 in millinery, followed by a diploma. She also has a City & Guilds qualification in tailoring, fashion and embroidery. She went on to teach City & Guilds millinery for a number of years, during which time she did a placement with Stephen Jones and worked for Noel Stewart.

In 1997, Bobbi started Chic Chapeau, a bespoke millinery business which also offers one-to-one tuition, group workshops and hen parties. Bobbi lives with her husband near Worcester, UK. www.chicchapeau.co.uk
BOOKLIST STAR REVIEW:
No invitation to the Royal Ascot horse race meeting? Head coverings not in vogue for an upcoming social event? Even if millinery isn’t de rigueur these days, UK maker (and self-proclaimed "Mad Hatter") Heath will change the fashion rules. This seductive how-to tome could make even a non-DIYer interested in hat making. Heath's six designs represent twenty-first century patterns, even though their origins might be reminiscent of the Downton Abbey or Jackie Kennedy eras. Techniques are fairly easy to master, like sewing straight stitches or wielding a steam iron, and the actual how-tos are well visualized, with step-by-step color photographs and lengthy captions as good guidelines. Running commentary that educates and delights is an added bonus, like on the use of mercury in the curing of felt for hats until 1941, causing the "madness" associated with makers. The practice stopped with the government’s requisition of mercury as a heavy metal for war instruments. Hats off!
— Barbara Jacobs  Booklist 2021 ***STAR REVIEW***