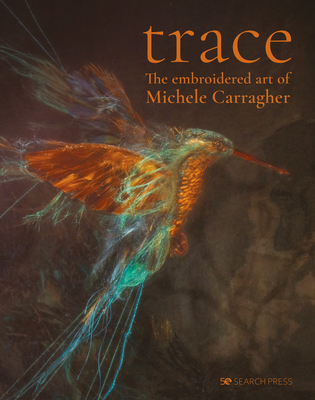 
Email or call for price
A sumptuous exploration of the work of renowned costume embroiderer, Michele Carragher.

Staggeringly detailed and sumptuously worked, Michele Carragher's embroidered art is breathtaking to behold. This rich and detailed insight into her work guides you from her initial ideas, right through to the finished, astonishing pieces of work.

Rich in symbolism and drawing inspiration from throughout history, the book contains three created, embroidered artifacts: a lavish glove, jeweled bodice and Japanese-style hair pin. From these she extracts a narrative which becomes the basis for three embroidered artworks, exploring themes of human duality and our behavioral effects on society and the planet. The book begins with an immersive, exquisitely photographed gallery tour of all the pieces, showcasing Michele's work in incredible detail. Following on from this, each artifact and artwork is discussed in detail, giving insight into the working process, creative choices and techniques used.

Michele has worked for many years in the film and TV industry, including as Costume Embroiderer for HBO's Game of Thrones, and HBO's 2005 costume Emmy award winning production of Elizabeth 1. The last chapter of the book will feature a selection of images from her inspiring catalog of work.
Michele Carragher studied Fashion Design before moving into textile conservation, repairing and restoring historical textiles. She then moved into costume embroidery for film and television, whilst continuing to develop her career as a mixed media artist. Embroidery became her main medium, predominantly raised embroidery, combining it with more contemporary techniques to create artwork that is both original and refreshing, and influenced by nature and the use of symbolism, metaphor and narrative.

Michele has worked on a number of prestigious productions, including the 2005 costume award-winning production of Elizabeth 1st and more recently The Crown and HBO's multi costume award-winning television series Game of Thrones, working on all seasons to date. The success of Game of Thrones, and the recognition and appreciation of the costumes that she has worked on, have gone on to help highlight Michele's work. Many of the costumes that Michele embroidered for the show have been on exhibition in various museums in the US. Michele's work on the show, along with her own personal textile artworks, have been featured in many renowned craft magazines and other press outlets worldwide, including The New Yorker and The Telegraph.