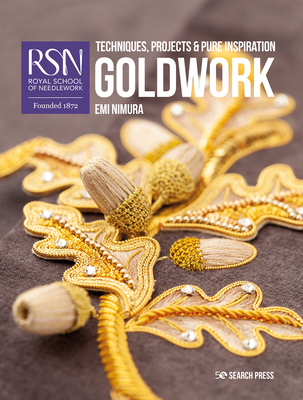 
Usually Ships in 1-5 Days
Learn the historical art of goldwork in this informative guide from the Royal School of Needlework.

The Royal School of Needlework (RSN) is recognized internationally as a centre of excellence for embroidery, and Goldwork is the fourth title in a series of books showcasing the RSN's techniques and contemporary flair. Author Emi Nimura is a Graduate Apprentice and expert teacher with the RSN, and provides the reader with a thorough grounding in goldwork stitches and techniques, three beautiful projects and numerous inspiring finished pieces.

The book features an introduction to the RSN and its prestigious heritage. It reveals the history and context of goldwork, the materials and tools that are used, and clear, highly illustrated technical instruction that will allow the reader to achieve the technical expertise that goldwork demands.

In addition, there are numerous examples of Emi's exquisite work throughout the book, together with a varied range of finished works by other embroiderers that showcase the diversity of goldwork design in both a traditional and a contemporary context.
After graduating from the International Christian University and Otsuka Textile Design College in Japan, Emi worked as a professional beaded jewellery artist and contributed towards a number of beadwork and bead embroidery books.

Graduating from the RSN Apprenticeship with distinction, she was awarded the Charrington Broderer's Prize for top apprentice; the Hilda Watson Prize for Silk Shading and the Gold & Silver Wyre Drawer's Prize for Coronation Goldwork.

From April 2010, Emi has been the RSN's coordinator in Japan and teaches the Certificate & Diploma Courses in Tokyo and Osaka. Emi has organised two exhibitions of RSN work at the Kitagawa Gallery in Tokyo and she considers that her lifework is to introduce the world of English traditional embroidery to Japanese people and to contribute to a cultural exchange between the UK and Japan.