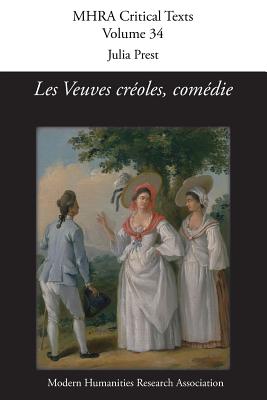 Les Veuves cr oles is the first play known to have been composed in Martinique. This three-act prose comedy was published anonymously in Paris in 1768 and was performed at least twice in the capital of Caribbean theatre, Saint-Domingue (now Haiti) during the colonial period. Set in colonial Martinique in the port town of Saint-Pierre, Les Veuves cr oles represents an early example of cr ole francophone drama. Three cr ole widows are courted by the grasping and dishonest Fatincourt who, after six years on the island, is keen to marry in order to repay his debts and return to France. The two older widows run successful businesses - a fact that, for Fatincourt, renders them eligible despite their advanced years. The third widow is younger but is portrayed as foolish for believing herself superior to other cr oles thanks to a short visit she has made to France. The older widows eventually unite in order to thwart Fatincourt, and it is metropolitan France that emerges as the principal source of wrong-doing in this lively play. Contemporary reviewers in the Parisian press were uncertain how to respond to the play's cr ole slant, but acknowledged its comic and theatrical merits. It is hoped that both elements will be of interest today.