Speak Up!: Speeches by young people to empower and inspire (Hardcover) 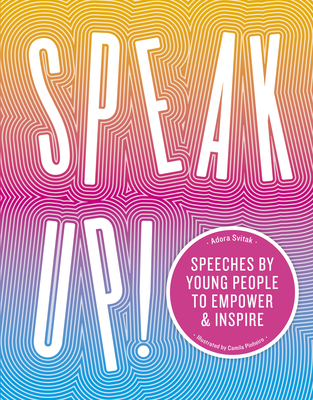 Speak Up!: Speeches by young people to empower and inspire (Hardcover)


Usually Ships in 1-5 Days
Speak Up! is a joyful celebration of 45 speeches by children and teenagers who have stood up for causes they passionately believe in and challenged adults in power to take note.

This collection is testament to the hopefulness and spirit of the next generation, and the positive belief that we can, and should, act to protect the things we love.

From ground-breaking scientific inventions to pleas for the environment, anti-war speeches to incredible testimony of lived experiences, the speeches collected here demonstrate the profound wisdom of youth and why it is important to speak up and out on what concerns us.

‘A society that cuts itself off from its youth severs its own lifeline; it is condemned to bleed to death.’
—Kofi Annan

Adora Svitak is a Bay Area-based writer and public speaker who advocates for youth empowerment around the world. In 2010, she delivered the speech ‘What Adults Can Learn from Kids’ at TED. It has received over 5 million views on TED.com alone, and has been translated into more than 40 different languages.

Adora was named one of the ‘30 Top Thinkers Under 30’ by Pacific Standard Magazine and contributes to numerous publications including Huffington Post, Mashable, Women's Media Center, Bust, The Bold Italic, and the TED blog. She has spoken in front of audiences at Google, Mashable and the United Nations. In addition to amplifying the voices of youth via TEDx events, Adora also runs writing and public speaking workshops at local high-schools.

Camila Pinheiro is an illustrator, artist, and mother living in São Paulo, Brasil. She studied fashion and design in São Paulo, and worked for Dior and several agencies before opening her own studio. Her influences range from Magritte, Matisse and Mondrian to Alexander Girard.

"Greta Thunberg’s condemnation of climate crisis apathy and Malala Yousafzai’s heartfelt call to keep girls in education are just two of the 45 stirring speeches to feature in this absorbing book. The first-ever collection of speeches made by children and teenagers around the world, it shows that today’s young people are a force to be reckoned with."
—The Independent

“A compilation of inspiring speeches from youth around the world whose voices have helped move the needle of progress. Svitak (Yang in Disguise, 2011, etc.) collects and presents speeches by young people who have had a positive impact on society and politics. From human rights to politics, science, technology, environmentalism, and other areas, this book highlights diverse examples of people whose adolescence proved to be an advantage rather than a drawback. Each speech excerpt is preceded by a summary explaining the problems that spurred them to action and innovation and the changes that came about as a result of their impressive and necessary work. Present in each story and speech is the reminder that it is their youthful optimism, hope, and stamina that led to breakthroughs. Svitak's introductions give important context and showcase the magnitude and significance of the pioneering efforts of the youth featured here. The bright, realistic, and vibrant illustrations by Pinheiro (So Here I Am, 2019) capture the upbeat tone of the book and will strongly appeal to readers. Along with well-known names such as Malala Yousafzai, Jazz Jennings, and Greta Thunberg, readers will meet Memory Banda, a Malawian activist working to end child marriage; Indigenous environmental protection advocate Xiuhtezcatl Martinez, and many more. Motivating narratives showing the power and necessity of young people as catalysts for change.” —Kirkus Reviews