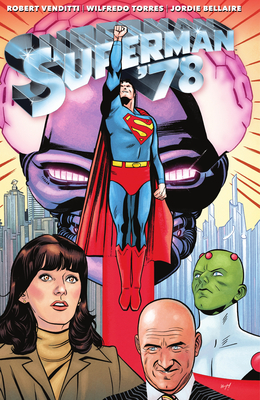 In the late 1970s moviegoers were thrilled by the words "You'll believe a man can fly!," which introduced actor Christopher Reeve as the silver screen's charming new Man of Steel. These adventures are set in a world where superheroes are strange, thrilling, and romantic.

These stories, written by comics veteran Robert Venditti (Hawkman, Green Lantern, Justice League) with crisply drawn art by Wilfredo Torres, feature colorful villains like Brainiac and Lex Luthor, as well as the heroism of Superman and the determined grit of reporter Lois Lane.

Collects the first 12 chapters of the Superman '78 digital comics series.
Robert Venditti is a New York Times bestselling author whose characters and concepts have been adapted to film and television. He has written the monthly comic book series Justice League, Green Lantern, and The Flash for DC Comics, X-O Manowar and Wrath of the Eternal Warrior for Valiant Entertainment, and the children's novel series Miles Taylor and the Golden Cape for Simon & Schuster. His nonfiction graphic novel Six Days is inspired by the story of his uncle's participation in D-Day.