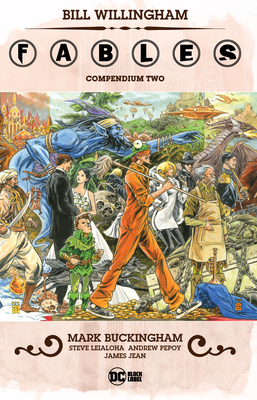 Once upon a time, the subjects of fairy tales—princesses, withces, talking animals, and more—lived far away in a fabled magical realm. But when a savage creature known only as the Adversary conquered their home, the characters of folklore were forced to flee to a more mundane world. Disguised among the normal citizens of 21-st century New York City, these magical beings have created their own secret society within an exclusive luxury apartment building called Fabbletown.

Now, after years in exile, the citizens of Fabletown are finally ready to reclaim their Homelands. The long-brewing war against the Adversary's empire is here, but even if our heroes succeed...happily ever after never comes without a price.

This second of four fantastic compendiums features tales from the Eisner Award-winning series, created and written by Bill Willingham and illustrated by Mark Buckingham, Steve Leialoha, Andrew Pepoy, James Jean, and many more!

Bill Willingham has been writing, and sometimes drawing, comics for more than 20 years. During that time, he's had work published by nearly every comics publisher in the business, and he's created many critically acclaimed comic book series, including Elementals, Coventry, Proposition Players, and of course the seminal Vertigo series Fables, as well as its spin-off series Fairest, Jack of Fables and The Literals. His work has been nominated for many awards, including the Eisner, Harvey, and Ignatz comic industry awards and the International Horror Guild award. He lives somewhere near a good poker room.