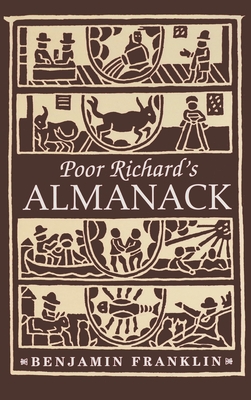 Faithful reproduction of the original edition of Poor Richard's Almanack

Courteous Reader: 'It is hardly necessary to state, that Franklin did not originate all the sayings of Poor Richard. He himself tells us, that they were the 'Wisdom of many ages and nations'. Any one, familiar with Bacon, Rochefoucauld, and Rabelais, as well as Others, will recognize old friends in some of these sayings, while a study of the Collection of Proverbs, made in the early part of the eighteenth century, by Ray and Palmer, will reveal the probable source from which Poor Richard pilfer'd. Yet, with but few exceptions, these maxims and aphorisms had been filter'd through Franklin's brain, and were ting'd with that mother wit, which so strongly and individually marks so much that he said and wrote. --Introduction by Paul Leicester Ford

''If you want the brutal truth, I did not expect to get much useful information out of Poor Richard's Almanack. I wondered, what could Benjamin Franklin--a guy who has been, no offense, dead for more than two hundred years--possibly have to say that would be relevant to a resident of today's dot-com world? Plenty, as it turns out.'' --from the Introduction by Dave Barry

Benjamin Franklin (1706-1790), diplomat, scientist, writer, inventor, and printer, was one of the drafters and signers of the Declaration of Independence. In his spare time, he founded the University of Pennsylvania and the first American public library.