11th Edition MIRROR STUDY BIBLE VOLUME 1 OF 3: Dr. Luke's brilliant account of the Life of Jesus & the beginnings of The Acts of the Apostles (Paperback) 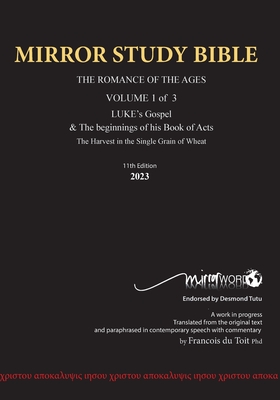 11th Edition MIRROR STUDY BIBLE VOLUME 1 OF 3: Dr. Luke's brilliant account of the Life of Jesus & the beginnings of The Acts of the Apostles (Paperback)

Since my 1st Edition print in 2012, the MSB has become a very bulky book.

The single book size of the 11th Edition exceeds 1200 pages, so, our Print on Demand Ingram publishers would in future print 3 Separate Volumes of approximately 500 pages each.

This is the First of our set of 3 Volume Formats:

My philosophy in doing the Mirror Bible is reflected in the following example:

I do not read music, but have often witnessed our son, Stefan, approach a new piece on the piano.

His eyes see so much more than mere marks scribbled on a page;

he hears the music.

His trained mind engages even the subtleties and the nuances of the original composition, and is able to repeat the authentic sound,

knowing that the destiny of the music would never be reduced to the page;

but is always in the next moment,

where the same intended beauty is heard

The best translation would always be the incarnation

I so value the enormity of the revelation of the incarnation.

Yet, before flesh, the Word was προς

face to face with God

scribbled thru the ages in memoirs of stone, parchment and papyrus pages -

and continues to translate faith

Now we have the same spirit of faith as he encountered when he wrote...

"Did not our hearts burn within our being when He spoke familiar text of ancient times, in the voices of Moses and the prophets and David and Abraham,

who saw his day

and announced its dawn in our hearts

The mystery that was hidden for ages and generations

In dealing daily with ancient text,

rediscovering thoughts buried in time, I am often overwhelmed and awed at the magnificence of eternity captured in little time capsules,

and us - conceived in their dream

And irresistibly intrigued by the invitation to come and drink -

to taste and see -

and to hear a saint reminiscing and reminding himself of the utterance of another earth dweller-brother, David, who wrote a song 1000 years ago,

"Return to your rest, oh my soul

For the Lord has dealt bountifully with you

I believe and so I speak "

And with fresh wounds bleeding from the many angry blows he was dealt with, Paul echoes,

Let's celebrate the "sameness" of Jesus

yesterday - yes, as far as history and beyond time can go -

plus, the infinite future

Inexhaustible, beyond boundaries and the confines of space and time