Speak a Word for Freedom: Women against Slavery (Hardcover) 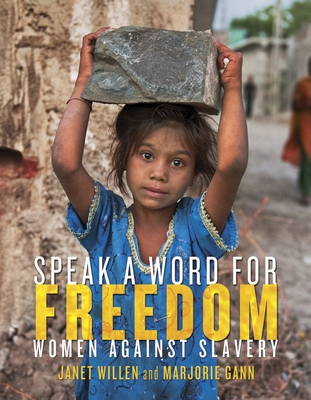 Speak a Word for Freedom: Women against Slavery (Hardcover)

From the early days of the antislavery movement, when political action by women was frowned upon, British and American women were tireless and uncompromising campaigners. Without their efforts, emancipation would have taken much longer. And the commitment of today's women, who fight against human trafficking and child slavery, descends directly from that of the early female activists. Speak a Word for Freedom: Women against Slavery tells the story of fourteen of these women. Meet Alice Seeley Harris, the British missionary whose graphic photographs of mutilated Congolese rubber slaves in 1904 galvanized a nation; Hadijatou Mani, the woman from Niger who successfully sued her own government in 2008 for failing to protect her from slavery, as well as Elizabeth Freeman, Elizabeth Heyrick, Ellen Craft, Harriet Tubman, Harriet Beecher Stowe, Frances Anne Kemble, Kathleen Simon, Fredericka Martin, Timea Nagy, Micheline Slattery, Sheila Roseau and Nina Smith. With photographs, source notes, and index.

Janet Willen has been a writer and editor for more than thirty years, working on publications ranging from remedial writing curricula to articles on health and safety. Her first book co-authored with Marjorie Gann, Five Thousand Years of Slavery, was published to much critical acclaim. Janet holds a master's degree in political science from the New School for Social Research. She lives with her husband in Silver Spring, Maryland.

Marjorie Gann, an educator for over thirty years, has written language arts materials for elementary grades. While living and working in Atlantic Canada, she wrote Discover Canada: New Brunswick. The first book she co-authored with Janet Willen, Five Thousand Years of Slavery, was chosen as the Silver Winner - Book of the Year Awards for YA. Non-Fiction by ForeWord Reviews. Marjorie now lives in Toronto, Ontario, with her husband.
“The authors of the outstanding global history Five Thousand Years of Slavery (2011) offer an equally impressive collection of 14 profiles of women who, from the 18th century to the present, have heroically championed emancipation and an end to human bondage .... An inspiring collection of those who have fought and continue to fight against the evil of slavery and an effectively solemn reminder that slavery remains a global plague.” - Kirkus Reviews


“Readers who think of slavery as an institution relegated to the past will be enlightened by this engrossing study of female abolitionists from the 18th century to the present day .... A powerful indictment of human rights abuses and tribute to the women who have fought them.” - Starred Review, Publishers Weekly


“This inspirational collection shares the lives and work of women who have fought slavery both past and present .... Readers will be shocked at the atrocities people face in our modern world and may even be inspired to inform others or add their voice to a cause .... This volume can serve as both a readable, narrative nonfiction piece and a collection of separate pieces on slavery in its many forms, past and present.” - VOYA Magazine


“In the varied, informative, and clearly written accounts, Willen and Gann address each woman’s personality, opportunities, and accomplishments. With the exceptions of Harriet Tubman and Harriet Beecher Stowe, most of the women featured will be new to most readers. The powerful message, that the fight to end slavery is ongoing and depends on a wide variety of actions and individuals, will both educate teens on this important issue and inspire them to take active roles in civic life.” - Booklist