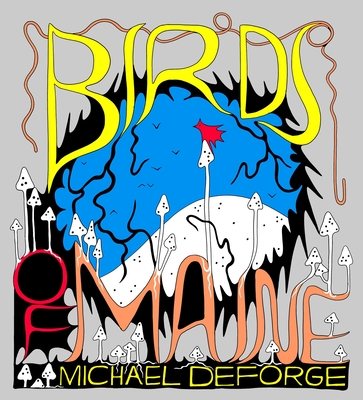 Take flight to this post-apocalyptic utopia filled with birds.

Birds roam freely around the Moon complete with fruitful trees, sophisticated fungal networks, and an enviable socialist order. The universal worm feeds all, there are no weekends, and economics is as fantastical a study as unicorn psychology. No concept of money or wealth plagues the thoughts of these free-minded birds. Instead, there are angsty teens who form bands to show off their best bird song and other youngsters who yearn to become clothing designers even though clothes are only necessary during war. (The truly honourable professions for most birds are historian and/or librarian.) These birds are free to crush on hot pelicans and live their best lives until a crash-landed human from Earth threatens to change everything.

Michael DeForge’s post-apocalyptic reality brings together the author’s quintessential deadpan humour, surrealist imagination, and undeniable socio-political insight. Appearing originally as a webcomic, Birds of Maine follows DeForge’s prolific trajectory of astounding graphic novels that reimagine and question the world as we know it. His latest comic captures the optimistic glow of utopian imagination with a late-capitalism sting of irony.

Michael DeForge is a cartoonist, an illustrator, and a community organizer who lives Toronto, Ontario.

“Birds of Maine, about a colony of birds fleeing disaster, showcases Michael DeForge’s trademark blend of the enigmatic and the ridiculous."—Etelka Lehoczky, The New York Times

"Birds of Maine is a rare positive post-apocalyptic tale, and it’s vibrantly hopeful and engaging."—Nerdist

“DeForge examines both how we build our own sense of self and how others take on the roles we create for them.”—The Guardian

"DeForge’s often hilarious, sometimes cutting satire is made more impactful by the sense he’s driven less by anger than compassion for those trapped in absurd, faltering systems. Not to be missed."—Library Journal, Starred Review