Still Hopeful: Lessons from a Lifetime of Activism (Paperback) 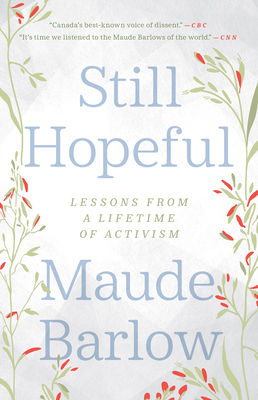 Still Hopeful: Lessons from a Lifetime of Activism (Paperback)

"It's time we listened to the Maude Barlows of the world." -- CNN

In this timely book, Barlow counters the prevailing atmosphere of pessimism that surrounds us and offers lessons of hope that she has learned from a lifetime of activism. She has been a linchpin in three major movements in her life: second-wave feminism, the battle against free trade and globalization, and the global fight for water justice. From each of these she draws her lessons of hope, emphasizing that effective activism is not really about the goal, rather it is about building a movement and finding like-minded people to carry the load with you. Barlow knows firsthand how hard fighting for change can be. But she also knows that change does happen and that hope is the essential ingredient.

Maude Barlow is the bestselling author of 20 books. She sits on the board of Food & Water Watch, the Global Alliance for the Rights of Nature, and is a councillor with the World Future Council. She served as senior water advisor to the UN General Assembly and was a leader in the campaign to have water recognized as a human right. She is the recipient of fourteen honorary doctorates, the Right Livelihood Award and is the current chancellor of Brescia University. She lives in Ottawa, Ontario.