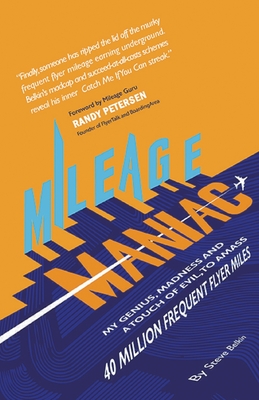 Steve Belkin is the 'Catch Me If You Can' of the frequent flyer mileage world and master navigator of the airline rewards underground. You be the judge of whether Belkin's sometimes daring, sometimes dubious, but always madcap, multi-million mileage earning was the stuff worthy of admiration or derision. With his over-the-top mileage earning plots, Belkin's attempts to stay under the radar were impossible. He couldn't escape the crosshairs of the airline fraud and security departments, the federal district court of Massachusetts, the Drug Enforcement Agency in Thailand, or the fearsome 'chocolate police' from Swiss Air. Were his mileage projects entrepreneurial escapades, greedy exploits or dark schemes? Even Belkin wasn't always sure.

Once Belkin discovered creative and convoluted ways to earn international Business Class award tickets for pennies (even tenths-of a penny ) on the dollar, it became increasingly hard for him to determine when enough was enough. Was his relentless pursuit of the Almighty Mile steeped in opportunity or obsessiveness?

Belkin mastered the art of mileage laundering. He found otherwise arcane promotions and products like luggage tags, magazine subscriptions and hair transplant consultations which seemingly only yielded a couple of thousand miles. Yet, he bought thousands of these superfluous items to transform them into a multi-million mile earning extravaganzas.

Airline mileage earning is an unwitting hobby for the millions of people who step on a plane or whip out their credit card. But, it's a hobby fraught with frustration and resentment. The vast majority of people are thwarted in their attempts to redeem their miles at all, and those who do redeem, often are forced to do so at the extortionate peak rates. Mileage Maniac isn't a how-to book to make the mileage game easier for the reader. Rather, it's a chance for the reader to revel in the fact that somebody finally, namely Steve Belkin, actually beat the airlines (and beat 'em good ) at their own game.

Mileage godfather Randy Petersen (FlyerTalk) and current mileage maestro Brian Kelly (The Points Guy) both concur that Belkin was one of the precursors of travel hacking.