How to Destroy Surveillance Capitalism (Paperback) 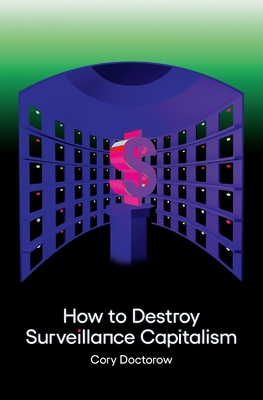 How to Destroy Surveillance Capitalism (Paperback)

OneZero, Medium's official technology publication, is thrilled to announce a print-on-demand edition of How to Destroy Surveillance Capitalism by Cory Doctorow, with an exclusive new chapter. How to Destroy Surveillance Capitalism was first published online in August, where it was an instant hit with readers, scholars, and critics alike. For years now, we've been hearing about the ills of surveillance capitalism - the business of extracting, collecting, and selling vast reams of user data that has exploded with the rise of tech giants like Google, Facebook, and Amazon. But what if everything we've been hearing is wrong? What if surveillance capitalism is not some rogue capitalism or a wrong turn taken by some misguided corporations? What if the system is working exactly as intended - and the only hope of restoring an open web is to take the fight directly to the system itself? In Doctorow's timely and crucial new nonfiction work, the internationally bestselling author of Walkaway, Down and Out in the Magic Kingdom, and Little Brother, argues that if we're to have any hope of destroying surveillance capitalism, we're going to have to destroy the monopolies that currently comprise the commercial web as we know it. Only by breaking apart the tech giants that totally control our online experiences can we hope to return to a more open and free web - one where predatory data-harvesting is not a founding principle. Doctorow shows how, despite popular misconception, Facebook and Google do not possess any "mind-control rays" capable of brainwashing users into, say, voting for a presidential candidate or joining an extremist group--they have simply used their monopoly power to profit mightily off of people interested in doing those things and made it easy for them to find each other.Doctorow takes us on a whirlwind tour of the last 30 years of digital rights battles and the history of American monopoly - and where the two intersect. Through a deeply compelling and highly readable narrative, he makes the case for breaking up Google, Facebook, Amazon, and Apple as a means of ending surveillance capitalism.