Claude Coats: Walt Disney's Imagineer : The Making of Disneyland From Toad Hall to the Haunted Mansion and Beyond (Hardcover) 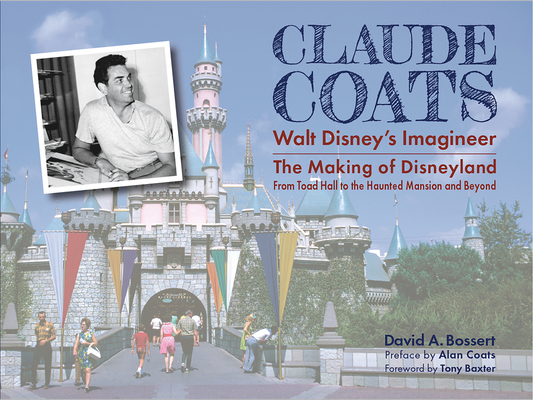 By David A. Bossert, Alan Coats (Preface by), Tony Baxter (Foreword by)
$65.00
Email or call for price

Claude Coats: Walt Disney’s Imagineer—The Making of Disneyland: From Toad Hall to the Haunted Mansion and Beyond is the story of artist and designer Claude Coats who, for more than half a century, was one of the most prolific creative talents at The Walt Disney Company and, arguably, the most accomplished. An unpretentious man of strapping stature, Claude was the artist behind some of the stunning backgrounds produced at the Disney studio during the Golden Age of animation before becoming one of the founding members, handed-picked by Walt Disney, to start the fabled WED Enterprises—now known as Walt Disney Imagineering. Working side by side with Walt Disney, Claude Coats is considered a significant influence in creating the first theme park, Disneyland, and a new form of creativity called Imagineering. He forever changed the worlds of global entertainment, technology, architecture, and popular culture.

David A. Bossert is an artist, filmmaker, and author. He is a 32-year veteran of The Walt Disney Company, where he contributed his talents to Who Framed Roger Rabbit, The Little Mermaid, Beauty and the Beast, Aladdin, The Lion King, Fantasia/2000, among many others. Bossert is considered an authority in Disney art and animation history. He was awarded a U.S. Patent in 2018 for his invention, Parallax Based Monoscopic Rendering. He received an additional U.S. Patent for Varying Display Content Based on Viewpoint. He continues to explore transformative, immersive experiences in book publishing.

“In the pantheon of Imagineers who worked directly with Walt Disney, Claude Coats stands tall… Long deserving of a dedicated book about his work at WED, Coats was a master creator who drove the designs behind a plethora of Disneyland classics.” —Christopher Merritt, author of Marc Davis In His Own Words: Imagineering the Disney Theme Parks

"Animator-turned-Walt Disney Imagineer Claud Coats shaped many of Disneyland’s early attractions, his expertise as a background artist bringing extravagant tableaux to life. David A. Bossert’s book focuses primarily on Coats’ theme park work, and in so doing treats large-scale and expansive environmental storytelling as the works of art they are. Many of Coats’ designs still stand in Disneyland today, and they helped to define what a ride-like environment would look and feel like." —Todd Martens, Los Angeles Times

"Claude Coats: Walt Disney’s Imagineer – the Making of Disneyland: from Toad Hall to the Haunted Mansion and Beyond does more than just tell the story of an unheralded Imagineer. It gives us a detailed look at the early days of Disneyland. The beautiful collection of vintage photos, concept art, and other materials documents how Walt’s dream became a reality. Coats worked at the center of attractions like the Submarine Voyage, Pirates of the Caribbean, the Mine Train through Nature’s Wonderland, and other highlights from the ’50s and ’60s. Bossert provides a behind-the-scenes tour along each step of Disneyland’s growth into the quintessential theme park." —Dan Heaton, Tomorrow Society

"Although he was widely loved and respected by his peers and even attained Disney Legend status in 1991, Claude Coats has remained a hidden figure in the vast Disney firmament. Hopefully, that’s about to change. With the recent release of David A. Bossert’s Claude Coats: Walt Disney’s Imagineer—The Making of Disneyland: From Toad Hall to the Haunted Mansion and Beyond [The Old Mill Press, 264 Pages, $65] the world will learn about Claude Coats – through indepth text and stunning archival photos – and his amazingly productive career with the Walt Disney Company." —AllEars