Reading Between the Lines: A Memoir (Hardcover) 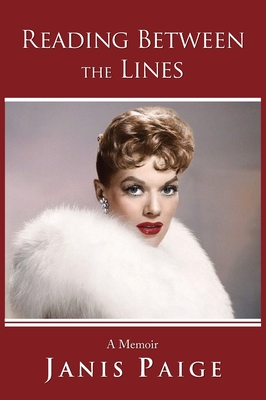 Reading Between the Lines: A Memoir (Hardcover)

A memoir that represents the lifelong journey - both personal and professional - of legendary actress Janis Paige. It's a deeply personal work, filled with stories of luminaries from the past. It also chronicles such adventures as the author's journeys to the battlefields of Vietnam and Korea as well as one unforgettable trip to South Africa.

From the Golden Age of Motion Pictures in the 1940s to vaudeville, Broadway, nightclubs, television and soaps, Janis Paige has known it all. She and her insatiable curiosity about life bring the reader into her relationships with Frank Sinatra, Bob Hope, Bette Davis, Joan Crawford, David Niven, Henry Fonda, Clark Gable, Lucille Ball, Sammy Davis Jr. - and finally, through therapy, the one she found with herself.

Blessed with an acutely intact memory, Paige takes her readers on an unforgettable journey throughout the world. Her USO Christmas tours with Hope transport us from Castro and Cuba to the Far East and numerous places in-between.

When her songwriter husband, Ray Gilbert - an Oscar winner for the tune "Zip-A-Dee-Doo-Dah" - died suddenly in 1976, Paige's life made a 180-degree turn from the one she had previously known. She moved past her rereavement to protect his legacy, and has now crafted a showbiz memoir like no other.