The Sound of the Snow Geese (Paperback) 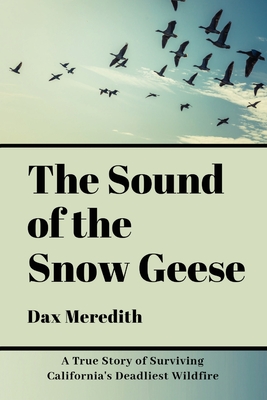 The Sound of the Snow Geese (Paperback)

A true-life story of natural disaster, escape, and recovery, The Sound of the Snow Geese is a poignant yet uplifting tale of a mother and her son surviving one of the world's deadliest wildfires in hopes of reuniting with her other child.

During the end of recovery from a long term illness, Dax Meredith was looking forward to life for her and her children being peaceful for awhile. Instead, her worst nightmare was about to happen. On November 8, 2018, all Hellfire broke loose on a grouping of small mountainous towns, decimating the city of Paradise with a staggering death toll count. During evacuation, she and her son were forced to abandon their vehicle and run on foot for their lives.

In an awe-inspiring narrative, Dax openly shares an unapologetically honest depiction of their experiences during the California Camp Fire disaster. She graphically describes the events, emotions, and miracles of that day and the days following the fire. This compelling account of terror, resiliency, and faith is certain to touch your heart.