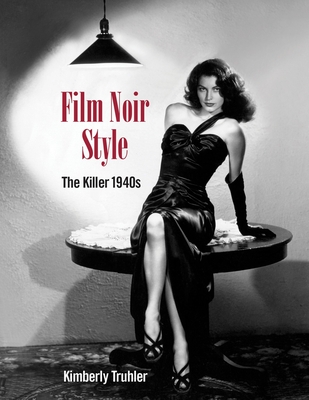 
Email or call for price
Film Noir Style: The Killer 1940s looks at the fashions of the femmes fatales who were so good at being bad, and the suits and trench coats of definitive noir actors such as Humphrey Bogart and Alan Ladd. Film and fashion historian Kimberly Truhler explores twenty definitive film noir titles from 1941 to 1950 and traces the evolution of popular fashion in the decade of the '40s, the impact of World War II on home-front fashion, and the influence of the film noir genre on popular fashion then and now. Meet not only the fabulous women of noir, including Betty Grable, Veronica Lake, Gene Tierney, Lauren Bacall, Barbara Stanwyck, Ava Gardner, and many others, but also the costume designers that created and recreated these famous stars as killers—and worse—through the clothes they wore.
With more than twenty years of study in film and fashion history, Kimberly Truhler is an author, educator, guest speaker, and host of screening series on the history of fashion in film. She was an Adjunct Professor at Woodbury University and an expert for organizations such as Turner Classic Movies (TCM), Sony Pictures Television, the National Film Registry, BBC Worldwide, and Christie’s auction house. Truhler has been interviewed by publications ranging from the New York Post to Elle Canada. In 2019 she was featured throughout CNN’s series American Style. In addition to writing Film Noir Style, she is a contributor for the upcoming Encyclopedia of Film and Television Costume Design.
"Film historian Kimberly Truhler approaches the noir production years in four larger chapters, as every few years a fresh style or type of women was featured. These alterations and new trends open up each chapter with valuable information, and many black-and-white pictures confirm it. Film Noir Style is a very pleasing 8.5 x 11 inches addition to any film noir library, and a visual feast for those interested in the high art of 1940s costume design." —Dr. A Ebert, Pop Culture Shelf

"In this sumptuously illustrated debut, fashion historian Truhler explores how film noir was shaped and enhanced by the role of the costume designer. Truhler provides the reader with a great understanding of how costume choices can intersect with subject matter. Upon finishing this delightful history, film fans and fashion buffs will want to go on a classic movie binge." —Publisher's Weekly

"With Film Noir Style, Kimberly Truhler pulls off the tricky challenge of writing to a broad audience. Her well-written book will appeal to both film school graduates and more casual fans who simply love the look of noir, like Rita Hayworth's in Gilda. Truhler's exploration of Hollywood's darkest and sexiest movies of the 1940s has style of its own." —Ben Mankiewicz, Primetime host of Turner Classic Movies

"Style is the essential appeal of film noir, and Kimberly Truhler's book is an essential addition to the history of the noir movement. I learned a lot." —Eddie Muller, Nost of Turner Classic Movies' Noir Alley and found of the Film Noir Foundation

"Film Noir Style: The Killer 1940s, is a luscious deep dive into, not just a decade, but the fashion iconography of just nineteen memorable films from that decade shadowed by World War II. ...This book [is] useful for the casual and the scholarly reader, filled with wonderful photos, fascinating text and a detailed list of references, chapter by chapter, as well as an index. If you’re interested in film noir, 1940s fashion or the careers of these memorable actors, Film Noir Style: The Killer ’40s does not disappoint." —Laura Boyes, Syncopated Times

"Truhler's new book, Film Noir Style: The Killer 1940s gives viewers the backstories behind the costumes of the era. Truhler also delves into the era's shadowy lighting design, as well as how German expressionism and 1930s pre-code films influenced the noir genre. ilm Noir Style takes a deep dive into the costumes of 20 films, offering details on everything from director Michael Curtiz's determination to "deglamorize" Joan Crawford, while a look at 1944's Double Indemnity features Edith Head's ingenuity in solving what was determined to be Barbara Stanwyck's "figure problems."" —Laurie Brookins, The Hollywookd Reporter

"Truhler gives each of twenty noirs made in the 1940s, from The Maltese Falcon (1941) to Sunset Boulevard (1950), its own costume-centric analysis. While she says that she has selected each movie for its sartorial splendor rather than its renown, most of these films check both boxes. Chalk it up to cause and effect." —Nell Beram, Noir City

"...fashion historian Kimberly Truhler takes us behind the studio sets and into the wardrobe rooms inhabited by the costume designers who gave the stars the signature style of film noir. The men stars receive attention too, of course, but the book is chockablock with fabulous photos – black and white, naturally – that emphasize the ladies." —Christopher Osterberg, Budapest Times