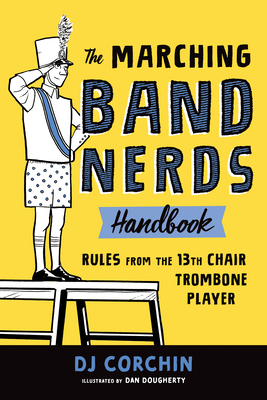 The perfect gift for band nerds past and present, The Marching Band Nerds Handbook deftly captures all the humor and inside jokes band nerds love. Hold on to your shirts and plumes

This hilarious and inspiring guide to surviving life in the marching band is for anyone who has taken a step on the marching field or has just driven by a field on the highway. All the best (and funniest) secrets are revealed in this series of rules and illustrations that, if followed strictly, almost guarantees world domination (actual results may vary).

Band nerds of all ages are sure to agree with expert rules like: Never give drummers metal sticks--they'll think they're ninjas (but most ninjas are actually clarinet players)Band parents may be adults but that doesn't mean they don't still need supervisionDon't lock your knees while standing at attentionMarching band is an art, not a sport--but if it were a sport, the drummers would win