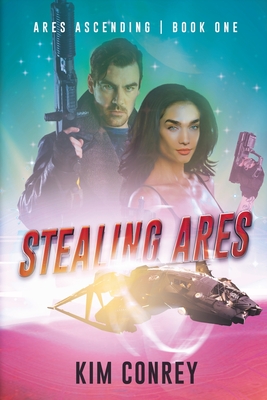 "Whether you're a sci-fi fan, a romance devotee, or someone who enjoys a beautiful story of survival, it's impossible not to fall in love with Harlow Hanson." -Katherine Nichols, author of The Unreliables

In the 25th century, the caldera under Yellowstone National Park erupts and spreads ashen death across the Earth, which can no longer supply the struggling colony on Mars. Worse, the HMS Ares, the grandest starship of all time, goes dormant when Mars needs her most. The Red Planet is ripe for revolution, but Harlow Hanson, a thief who struggled most of her life to speak, becomes the only one capable of saying the words that wake the sleeping ship and save the broken colony.

Meanwhile, resentments rise as Prince Jack Windsor-recently widowed and using the Ares to escape his grief-doggedly works to get the ship online and refuses to sell it for parts to fund the colonists' welfare. When Harlow sneaks on board to plunder it, the ship springs to life and begins communicating with her. The prince realizes the woman stealing from him is the key he's been searching for. Just as Jack begins to open his heart and offer Harlow a shot at redemption, she's forced to betray him. Against all odds, he fights to believe in her while the fate of two planets hangs in the balance.