Letter to the American Church (Hardcover) 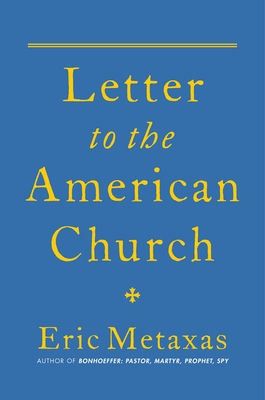 Letter to the American Church (Hardcover)


Usually Ships in 1-5 Days
In an earnest and searing wake-up call, the author of the bestseller Bonhoeffer: Pastor, Martyr, Prophet, Spy warns of the haunting similarities between today’s American church and the German church of the 1930s. Echoing Bonhoeffer’s prophetic call, Eric Metaxas exhorts his fellow Christians to repent of their silence in the face of evil before it is too late.

“Silence in the face of evil is itself evil.
Not to speak is to speak.
Not to act is to act.
God will not hold us guiltless.”

Can it really be God’s will that His children be silent at a time like this? Decrying the cowardice that masquerades as godly meekness, Eric Metaxas summons the Church to battle.

The author of a bestselling biography of Dietrich Bonhoeffer, Metaxas reveals the haunting similarities between today’s American Church and the German Church of the 1930s. Echoing the German martyr’s prophetic call, he exhorts his fellow Christians to repent of their silence in the face of evil.

An attenuated and unbiblical “faith” based on what Bonhoeffer called “cheap grace” has sapped the spiritual vitality of millions of Americans. Paying lip service to an insipid “evangelism,” they shrink from combating the evils of our time. Metaxas refutes the pernicious lie that fighting evil politicizes Christianity. As Bonhoeffer and other heroes of the faith insisted, the Church has an irreplaceable role in the culture of a nation. It is our duty to fight the powers of darkness, especially on behalf of the weak and vulnerable.

Silence is not an option. God calls us to defend the unborn, to confront the lies of cultural Marxism, and to battle the globalist tyranny that crushes human freedom. Confident that this is His fight, the Church must overcome fear and enter the fray, armed with the spiritual weapons of prayer, self-sacrifice, and love.
ERIC METAXAS is an author whose books have been translated into twenty-five languages. The host of a nationally syndicated radio show and the acclaimed conversation series Socrates in the City, he is a prominent cultural commentator whose work has appeared in the New York Times, the New Yorker, The Atlantic, and the Wall Street Journal. He lives with his family in New York City.

"This book is like a bucket of cold water thrown into the face of a sleeping church.  I found myself arguing with Eric over some points, but I was struck with the uncanny parallels he draws between the compliant churches in Nazi Germany and our churches today. If you are inclined to think you might disagree with what he has to say, here is my challenge: read this book and ask yourself ‘where does Eric have it  wrong’?. I think you will find that question more difficult to answer than  you expected. I personally think this is Eric Metaxas’ most important book for us today." -Erwin W. Lutzer, Pastor Emeritus, Moody Church, Chicago

"Eric Metaxas has spent years researching and writing about giants of our faith; from that wealth of insight and understanding he has taken a new step. In Letter to the American Church he has issued a call to action. The message is historically informed, Biblically sound and I believe “Spirit-directed”. I pray every Christ follower in our nation will take to the time to read and consider what Eric has presented." -Pastor Allen Jackson, World Outreach Church