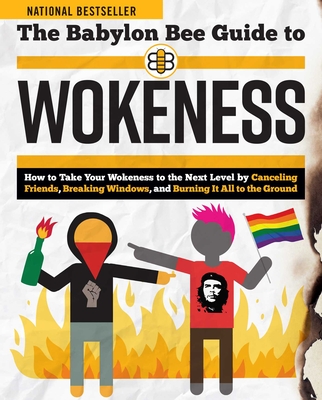 
Usually Ships in 1-5 Days
To show the world you're a good person—and also to avoid getting canceled and having your life ruined by a Twitter mob—you need to get WOKE. In The Babylon Bee Guide to Wokeness, the writers of satirical sensation The Babylon Bee tell you how to choose your pronouns, blame everyone else for your problems, and show the world how virtuous you are with virtue-signaling profile pictures and stunning and brave hashtags. A tongue-in-cheek guide to the far Left’s obsession with intersectional insanity, The Babylon Bee Guide to Wokeness will help you laugh at the state of our culture so you don’t cry.
Kyle Mann is the editor in chief of The Babylon Bee. He was created in an orc-spawning pit beneath the tower Orthanc near the end of the Third Age. Saruman the Many-Colored drew upon all his dark powers to imbue Kyle with the ability to write satire of semi-acceptable quality from time to time, and also pillage many small villages in Gondor. Kyle oversees and approves all content posted to the site and writes a good bit of it himself.

Joel Berry is The Babylon Bee’s managing editor and a deadly warrior-monk with a shadowy past. Part philosophy-quoting homeschool nerd, part Marine Corps veteran, Joel was found retired in a secluded cabin in the mountains after he swore off his old life and promised to never own a lib again. But Kyle Mann was getting a team together. He convinced Joel to come out of retirement for one final mission: to help run the world’s greatest satire site, which he’s been doing since 2016.