Velocipedomania: A Cultural History of the Velocipede in France (Paperback) 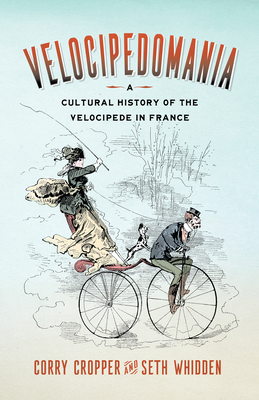 Velocipedomania: A Cultural History of the Velocipede in France (Paperback)


Usually Ships in 1-5 Days
When blacksmith Pierre Michaux affixed pedals to the front axle of a two-wheeled scooter with a seat, he helped kick off a craze known as velocipedomania, which swept France in the late 1860s. The immediate forerunner of the bicycle, the velocipede similarly reflected changing cultural attitudes and challenged gender norms.

Velocipedomania is the first in-depth study of the velocipede fad and the popular culture it inspired. It explores how the device was hailed as a symbol of France’s cutting-edge technological advancements, yet also marketed as an invention with a noble pedigree, born from the nation’s cultural and literary heritage. Giving readers a window into the material culture and enthusiasms of Second Empire France, it provides the first English translations of 1869’s Manual of the Velocipede, 1868’s Note on Monsieur Michaux’s Velocipede, and the 1869 operetta Dagobert and his Velocipede. It also reprints scores of rare images from newspapers and advertisements, analyzing how these magnificent machines captured the era’s visual imagination. By looking at how it influenced French attitudes towards politics, national identity, technology, fashion, fitness, and gender roles, this book shows how the short-lived craze of velocipedomania had a big impact.
CORRY CROPPER is a professor of French at Brigham Young University in Provo, Utah. His publications include Marianne Meets the Mormons, Mormons in Paris (Bucknell University Press), and Playing at Monarchy.

SETH WHIDDEN is a professor of French at the University of Oxford and a fellow and tutor in French at The Queen’s College, Oxford. His publications include monographs on Baudelaire, Verlaine, and Rimbaud, a biography of Rimbaud, and translations and critical editions. He is the editor of Nineteenth-Century French Studies.